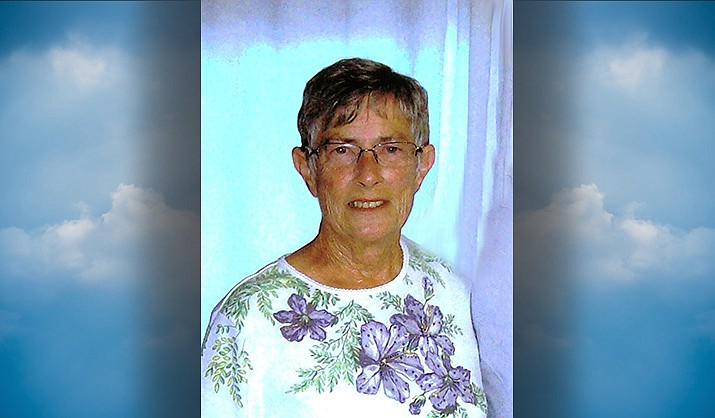 Mrs. Karin Irene Kesler Krippene, Rimrock, Arizona, passed away early Friday morning, July 29, 2022 from a combination of a severe attack of Atrial Fibrillation brought on by her advanced, end stage emphysema, which occurred on the evening of July 13, 2022, and did not survive the combined Cottonwood and Flagstaff Medical Center’s Emergency and Intensive care unit’s strenuous efforts to return her to a state where she could be returned to normal life.

Terminal Comfort Care was, subsequently, selected by Karin herself, once total exhaustion set in and no hope for a full and meaningful recovery was determined by all concerned.

Karin was preceded in death by both of her parents and a brother Donald.

Karin was born in Walla Walla, Washington on June 19, 1942, to Mrs. Georgia Irene Kesler and Mr. D. Claude (Pug) Kesler. She resided in Lewiston, Idaho, in a home built by her father and grandfather, and, for most of her early years, attended elementary, junior, and senior high schools in Lewiston, Idaho, graduating with the Class of 1960.

She, subsequently, attended and graduated from The University of Idaho at Moscow, Idaho in 1964 with a major in French and a minor in English and Education. She, additionally, was a member of the Alpha Gamma Delta sorority.

While still a Senior at the U of I, she met Mr. Brett C. Krippene, her future husband who became her lifetime companion for more than 58 plus years. Shortly after graduation from the University, she and her husband were married and moved to the San Francisco area in California to start their incredible journey together.

Karin was active in both Eastern Star and Jobs Daughters in her early school years in Lewiston, Idaho, and was an enthusiastic member of the Lewiston High School band and, additionally, of a small brass band ensemble where she played the Trumpet for many events during her years at Lewiston High School.

As her husband was involved in the design, construction and start up of several fossil-fuel fired power plants employing several advanced environmental control systems and technology during their early years together, and, while “on the road,” Karin often took on local employment as a substitute teacher, and/or as a travel agent and/or as an insurance broker for, first, Travelers Insurance Company, and then for AAA Insurance company.

She, additionally, applied for and obtained Teacher’s Certificates in Idaho, California, and Ohio. She was always working at something.

During her early years while they were traveling together, she gave birth to their daughter, Michelle Irene Huebner Krippene in 1968, and, to their son, Kevin Brett Krippene in 1970. After her children were born, Karin became involved, as a dedicated mother, with her children’s school and recreational activities in both Colorado and California and with the associated school accountability committees thereof.

Upon her husband’s semi-retirement from full-time employment at AECOM in 2003, they moved to Rimrock, AZ, where she became significantly involved in local community activities, and served on the boards of both the local Lake Montezuma Adult Center and the Lake Montezuma Property Owners Association for several years. She also served as co-owner of her husband’s BCK Consulting, LLC business, and was heavily involved with his Windgrabber wind energy power enhancer system patented technology, now under further development by others.

She was still very actively involved as a concerned member of the Beaver Creek Water Recourses committee at the time of her death. She will be sorely missed by all who knew, appreciated, and loved her.

Obit by Brett C. Krippene, with help from many others.

Services will be held at Bueler Funeral Home 143 W. Arnold Street Camp Verde, August 13, 2022 at 3 pm with a reception to follow at the American Legion Post 93, Camp Verde.

In leu of flowers donation may be made to American Legion Post 93 or VFW Post 6739. Condolences and happy memories may be shared at www.buelerfuneralhome.com