Review: ‘Bullet Train’ goes off the rails, but Pitt doesn’t 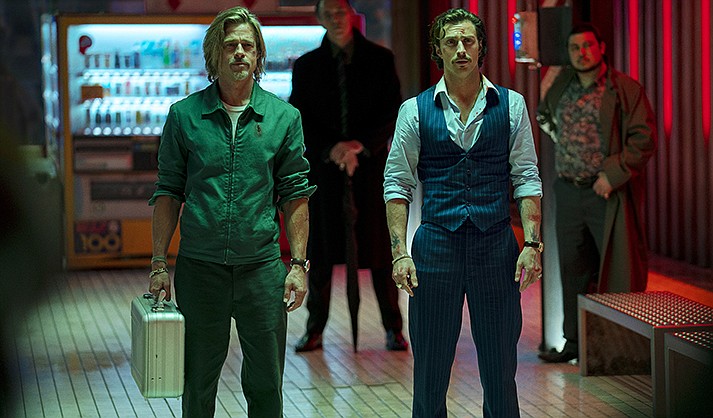 Aboard the speeding locomotive of “Bullet Train” ride at least five assassins, one venomous reptile (a snake on the train), countless glib Guy Ritchie-esque slo-mo action sequences, and one bucket-hat wearing Brad Pitt.

It’s a lot of ingredients that go into this candy-colored, battle royale of a movie. But the only one that really matters is that last one. At 58, Pitt’s star power has never seemed so easy and so natural. Radiant in “Once Upon a Time... in Hollywood,” delicious in “The Lost City,” Pitt glides into “Bullet Train” in an rarified state of cruise control. Seldom has a movie star seemed to be having so much fun.

In “Bullet Train,” which opens in theaters Friday, Pitt plays a hired gun by profession but little else. His code name is Ladybug. He doesn’t like guns. And in his first job back after a hiatus of self-reflection and therapy, he goes into lethal fights with great reluctance, spouting self-help slogans like “Hurt people hurt people” in the midst of hand-to-hand combat. Pitt, a maximum movie star with a minimalist bent, is a hitman with no taste for hitting.

Ladybug, tasked to grab a very particular briefcase off a train headed from Tokyo to Kyoto, might not be up for the job, but the bigger question is whether “Bullet Train” is a good enough vehicle for its biggest star. Director David Leitch, the stuntman-turned-director of “Atomic Blonde” and “Deadpool 2,” has brought the style and energy of a “John Wick” film (he co-directed the first) to a setting that has traditionally been associated with more subtle methods of killing.

But with films like Bong Joon Ho’s “Snowpiercer” and the Liam Neeson-led “The Commuter” greasing the wheels, train movies have chugged along since the original “Murder on the Orient Express.” Adapted from Kotaro Isaka’s pulpy novel, “MariaBeetle,” “Bullet Train” amps the carnage further and shifts the action to Japan.

But the location here is mostly just a neon-lit stage for a high-speed melee with an international ensemble, including Brian Tyree Henry (best of the bunch) and Aaron Taylor-Johnson as bickering British “twins”; Andrew Koji as a Japanese assassin; a Mexican cartel veteran named the Wolf (Benito A. Martinez Ocasio, a.k.a. Bad Bunny); a dangerous young woman called Prince who fake cries her way out of nearly everything (Joey King); and Zazie Beetz’s killer known as the Hornet.

All are on the train for various criminal reasons ultimately connected to a Russian kingpin named the White Death. The actor playing this most fearsome character is best left to the third-act reveal, but that’s just one way “Bullet Train” plays around with star persona. There’s a cameo that answers Pitt’s in “The Lost City.” Another “Lost City” star, Sandra Bullock, is mostly only heard on the other end of a phone line, as Ladybug’s handler.

The copious flashbacks and quirky banter (Henry’s character has an outlook based around Thomas the Tank Engine) that accompany the juggling of all these characters in between bloody encounters is a familiar kind of framework recalling a long line of Quentin Tarantino knockoffs. In “Bullet Train,” a movie that proudly opts for style over substance, characters are introduced like videogame fighters, running gags get run into the ground and a winking irreverence lands somewhere in between playful and exhausting.

It’s no train wreck. Leitch’s film is colorful, cartoonish and well-choreographed. But the more-is-more manic energy of “Bullet Train” eventually peters out, since that’s all the movie was ever running on. Well, that and Pitt. His charm alone does wonders for the movie, raising it at least to the level of watchable. When, in the finale, Ladybug sails comically unharmed through the wreckage, it captures the situation exactly. “Bullet Train” might go off the rails but Pitt remains bulletproof.

“Bullet Train,” a Columbia Pictures release, is rated R by the Motion Picture Association of America for strong and bloody violence, pervasive language, and brief sexuality. Running time: 126 minutes. Two and a half stars out of four.