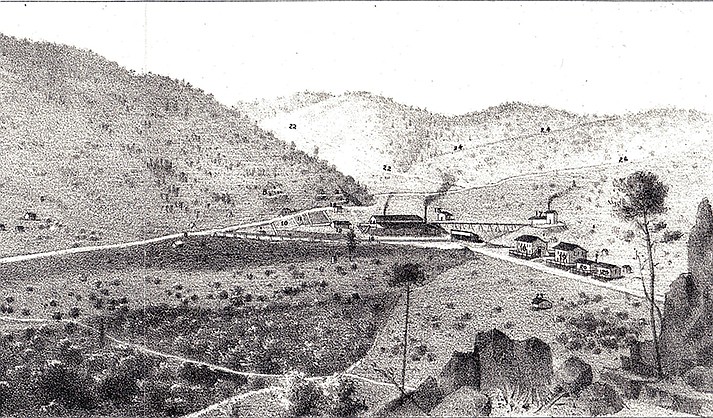 United Verde Copper Company in 1884, as it appeared when shareholders James A. Macdonald, president, Eugene M. Jerome, secretary-treasurer, Governor Frederick A. Tritle and Dr. Bushnell, board members, and other investors visited during January and May. (Czar James Dyer drawing, Glenda Farley collection.)

News that F. A. Tritle had leased the United Verde Copper Company mines and smelter brought dreams of prosperity to miners, businessmen, and residents of the Verde Valley and Yavapai County.

Frederick Augustus Tritle (1833-1906), attorney, businessman, and politician, served as the sixth Governor of Arizona Territory from March 8, 1882, until Nov. 2, 1885. In Nevada, he had been president of two mines, director of a railroad, and operated Tritle & Murray, a mine stocks and bonds brokerage office, with William B. Murphy, formerly of New York and San Francisco. Tritle & Murray opened briefly in Tombstone where they promoted copper and silver mines.

After F.A. Tritle was nominated to be the governor on Jan. 26, 1882, Tritle & Murray moved to Prescott, the territorial capital of Arizona.

Before he took office, F.A. Tritle hired Frederick F. Thomas, an experienced mining engineer with a degree from the Yale School of Mines, to examine mining properties for possible investment. He had looked at mines in the Tucson and Prescott areas before Angus McKinnon invited him to visit the Copper Camp in the Black Hills. Frederick liked the rich ore of the “Eureka” and “Wade Hampton.” He decided “that all the mines in the neighborhood ought to be consolidated and handled by one company.”

Although M. Andrew Ruffner had staked his first claim on March 15, 1876, he and Angus McKinnon had not staked the “Eureka” until June 16 and recorded it at Prescott on July 18, 1876. “Wade Hampton” was staked a year later. In order to finance their mining activities, Andy Ruffner and the McKinnon brothers sold interests in their mining properties to several individuals. The “Eureka” mill site, water right, and an interest in the “Wade Hampton” had been sold to Charles Lennig, of Philadelphia, on March 2, 1881. M. Andrew Ruffner, Angus and John McKinnon bonded their remaining interests in the “Wade Hampton” and the “Hermit” (now Company Hill) to Frederick Thomas. (Book 13 of Deeds, 600-603.)

Once the 20-acre mineral claims, 5-acre mill sites, water rights, etc., were secured, Frederick Thomas arrived in New York on Dec. 23 to help William Murray secure funding. They met with Eugene Murray Jerome, a second cousin of William Murray, who agreed to assist them with the new company. The United Verde Copper Company (UVCC) was incorporated Feb. 23, 1883. The Board of Directors appointed Frederick Thomas to be the superintendent and general manager and he conveyed the mining properties to the UVCC.

Frederick Thomas left New York on March 23, 1883, and returned to the Copper Camp where he had roads built to haul in equipment and supplies for working the mines and for the reduction of ore. Wood from the new sawmill was used to build the dormitory, boarding house, office, and other buildings. About 75 men were hired. The 36-inch water-jacket furnace was hauled in and began smelting ore on Aug. 1, 1883.

The Copper Camp was officially named to honor Eugene Jerome when the Jerome Post Office was established on Sept. 10, 1883. F. F. Thomas was postmaster until William Murray took over.

“It will be recollected that these mines produced over 1 million dollars’ worth of copper, silver, and gold by the use of only one water jacket furnace in the unprecedentedly short space of 14 months. The property, while still running, was closed down by the Board of Directors on Dec. 1, 1884, with quite a considerable sum of money in the treasury, owning to the low price of copper, the market price at the time being only 9 cents per pound.”

Another reason was the high freights on the transportation of bullion from the mines to Ash Fork, the nearest point on the Atlantic & Pacific Railroad, and the heavy cost of bringing in coke to the mines by the same route.”

“The increased facilities given by the new line of the Prescott & Arizona Central Railroad and the consequently greatly reduced freight rates on both bullion and coke have been inducements for Ex-Governor Tritle’s getting possession of this valuable property. The lease will run 16 months from the 15th of July last. On Monday last, the 1st of August, he commenced turning out mineral and the probabilities are that under his energetic, but capable management, it will be many years before the UVCC mines will cease to yield large and valuable products.” (Arizona Champion; Flagstaff; Aug. 6, 1887.)

During the first 25 days of operation the smelter produced 224 tons of copper matte and bullion, all carrying silver and gold. Only 60 tons had reached the railroad. (Arizona Weekly Journal-Miner; Sep. 7, 1887.)