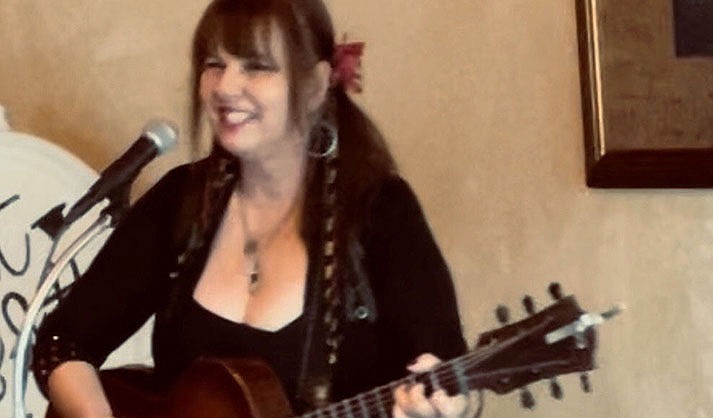 Singer/songwriter and multi-instrumentalist Christy Fisher will be featured in a solo performance for this month’s Music in the Stacks Concert Series on Thursday, Aug. 25, from 5 to 6:30 p.m. in Camp Verde Community Library’s Fireside Room.

Nominated in four categories by the 2021 International Singer and Songwriters Association, Christy’s performances are a combination of award-winning songwriting, unusual audio engineering techniques, and powerful vocals that have been compared to Annie Lennox, Ani Di Franco, and Linda Ronstadt.

Based in Jerome, Christy has performed with a few area musical groups throughout her 30 years in the area, including Mountain Stranded Time, Cattywampus, Christy and Frenz, The Jerome Philharmonic Convergence, and the Jerome Ukulele Orchestra...and has released two albums in the past year that are now charting in over 40 countries.

“The pandemic lockdown had a silver lining”, she says. “The lockdown time gave me the time I needed to build a home recording studio and get back to seriously pursuing my music again.”

Not a novice in the music world, Christy has been one of the voices behind many other musical ventures, including being signed to Decca Records and releasing a single from the show Jesus Christ Superstar. “My first release was a 45 rpm in the ‘70s, when playlists included a spindle and an insert.”

Her performance includes a behind-the-scenes look into how some of her recordings are created. Christy often uses objects like walls, stairwells, or kitchen utensils to build percussion tracks ...and then works audio magic with effects and loops, layering bass and keyboards.

You will hear her perform some of her “twisted covers”, (where she mashes up and puts a spin on everything from Britney Spears to the Zombies) along with original material from her first two albums, as well as hearing new material from her third album.

Camp Verde Community Library is located just off of Montezuma Castle Highway at 130 Black Bridge Road, Camp Verde. For more information about this or any other library program, visit the library’s website at CVLibrary.org or call 92-554-8391.