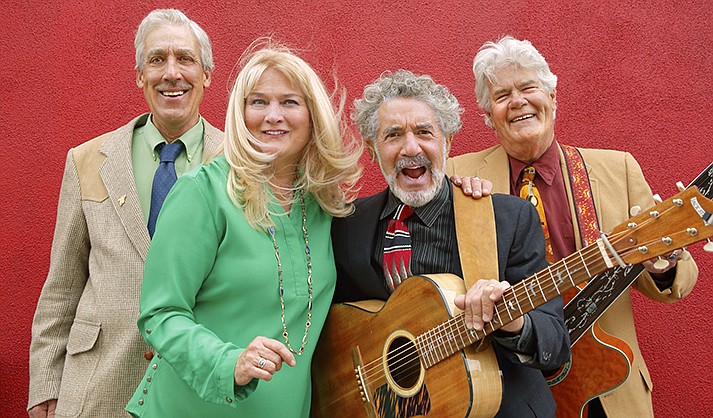 MacDougal Street West brings back the ballads, humor and emotions of the 60s for today’s audiences. Recall the magic! Experience the acoustic music and harmonies of Peter, Paul and Mary that changed the world. (Photo courtesy SIFF)

There will be two performances on Friday, Aug. 26 at 7 p.m. and Saturday, Aug. 27 at 4 p.m. at the Mary D. Fisher Theatre, presented by the Sedona International Film Festival.

MacDougal Street West brings back the ballads, humor and emotions of the ‘60s for today’s audiences. Recall the magic. Experience the acoustic music and harmonies of Peter, Paul and Mary that changed the world.

The new flowering of a vibrant musical tradition was rooted in Greenwich Village of the early 1960s. Legendary folk singers and songwriters of that era could first be heard nightly in the cafes stretching along fabled MacDougal Street.

Today, great folk still lives on in MacDougal Street West.  The urban vibe of Greenwich Village elicits memories of exciting times past and hopes for brighter days ahead.

Having grown up in the ‘60S, Mary Alberts finds particular joy in keeping alive the good vibe of one of her musical heroes, Mary Travers.  You can hear and see the affinity between them in the contemporary Mary’s contributions to MacDougal Street West performances. A similar warmth of tone and personality with the original Mary helps listeners harken back to the halcyon days of the Peter, Paul, and Mary experience. In addition to Travers, she counts among her musical influences performers of the folk and folk rock genres, such as Joan Baez, Linda Ronstadt, the Seekers, the Byrds, and Crosby, Stills, Nash and Young.

Like many of today’s top performers, Mary honed her musical gifts in church.  Her long apprenticeship in vocal groups ranging from traditional choirs to contemporary bands and as a soloist helped her forge a soulful sound in keeping with the best of the folk tradition. This current collaboration with fellow folk aficionados is an exciting stage in her evolution as a performer.

In 1962, Peter, Paul and Mary’s first album was released. After the album, 11-year-old Rick asked if he could learn to play guitar and hasn’t stopped learning and playing. From junior high through college, Rick has been in groups that feature his favorite sounds: PPM, Kingston Trio, Beach Boys, Hollies, Buffalo Springfield and CSNY.

Excited for the opportunity to return to his musical roots, Rick loves to find the seemingly simple, yet deceptively complex harmonies of Peter, Paul and Mary so that their magical sound can be immediately felt and appreciated by audiences of MacDougal Street West.

Paul Auer’s musical journey began in high school while singing with both the concert and madrigal choirs. His initial ventures with the harmonica and guitar soon followed. It was in a basic folk guitar class that he first learned to play Peter, Paul and Mary’s “Puff the Magic Dragon” and “500 Miles.” While attending Fullerton College in California, Paul minored in music and studied theory and jazz harmony. Other influences were Neil Young, Joni Mitchell, the Moody Blues, and the Allman Brothers. Soon he was performing with other musicians in duos, trios, and eventually with a San Francisco area rock band.

After moving to Prescott, Arizona in 1999, he joined Rick Shore, a future MacDougal Street West bandmate, to form “Poker Night Out.” This group focused on the close vocal harmonies of the Beatles and Crosby, Stills, Nash and Young. This ensemble recorded two albums of original music and gained a local following. Paul is excited to build upon those experiences as he joins MacDougal Street West.

Bill was born and raised in the “badlands” of eastern Montana, but headed south to Texas in ‘76. He played in several bands in and around Austin for years, finally arriving in Prescott in 1999. “I love this town and I love making music here with the many friends I’ve found. I’m home.”

Tickets are $30 general admission; $25 for film festival members. All tickets include a meet-and-greet with MacDougal Street West band members in the lobby after the show.