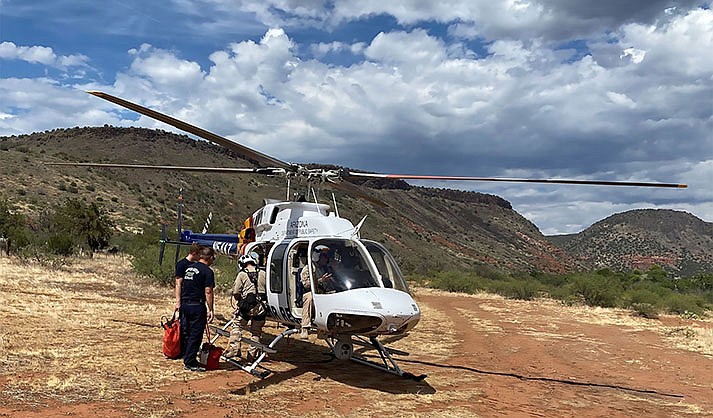 DPS Ranger 58 was called in for a rescue attempt on the Bell Trail similar to this situation in July. (CCFMD file photo)

RIMROCK – On a busy night for emergency services Aug. 27, Copper Canyon Fire & Medical personnel were called out to the Bell Trail north of Rimrock for an injured hiker.

According to CCFMD, the hiker was 3.5 miles from the trailhead at the swimming hole “The Crack” and had a possibly broken ankle. The call came in around 5:30 p.m. The DPS helicopter Ranger 58 also responded.

The DPS Ranger reportedly made several unsuccessful attempts at a rescue but was thwarted by the dangerous terrain and falling darkness. CCFMD sent in eight crew members from two stations, saying it took “five hours to safely package and extricate the patient.”

During that time, Copper Canyon received eight more calls for emergency assistance in its district. With automatic aid in place with neighboring districts, crews from Verde Valley Fire District and Sedona Fire District were able to step in and cover any gaps as first responders were stretched thin.

The injured hiker was transported to a waiting ground ambulance for treatment.