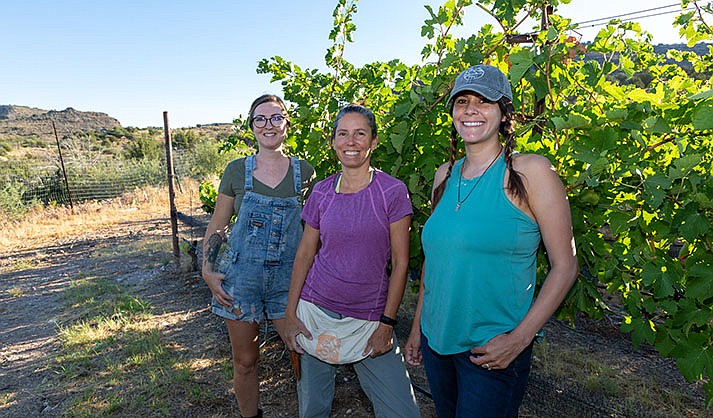 Vin de Filles is an Arizona Women’s Project supported by Page Springs Cellars (PSC), located at the foothills of Sedona.

This project was founded during a grape harvest in 2019 by Gayle Glomski, who works at Page Springs Cellars. Page Springs Cellars harvesting crews were committed to picking grapes, so she gathered a crew to run her pick. The pick was moving quickly and efficiently with lots of fun energy.

Gayle noticed that the crew was 99% women, all embracing grueling physical labor and loving every moment. This ‘ah ha’ moment created the momentum to recognize and support the women behind wine production which is a male dominated industry.

The idea of a female-produced wine was proposed to Bree Nation, PSC’s cellar master and co-owner of The Oddity Wine Collective as well as Lauren Maldonado, co-owner of Art of Wine in Sedona. The three women collaborated on a mission statement for the project: A wine produced by women to highlight the vitality and feminine strength within the world of wine.

The group of women volunteers range between the ages of 11 and 68. They nurtured two different grape varieties, Malvasia and Syrah since the beginning of the 2020 winegrowing season for their pied-de-cuve co-ferment. Jenelle Bonifield, a professional female photographer photo-documented the journey: pruning, shoot thinning, suckering, leaf pulling, hedging, netting, harvesting, pressing and bottling. Lauren designed the label showing homage to Page Springs Cellars and adding a feminine twist.

The project’s net profits will be donated to The Verde Valley Sanctuary for their transitional housing program which will provide survivors of domestic violence and sexual assault private accommodations for their families and pets.

Tickets are on sale at Shop.pagespringscellars.com/Shop/Wines.

Learn more about Vin de Filles at PageSpringsCellars.com/vin-de-filles and on their social media. To become a sponsor for the release party or for more information about the event, please contact Gayle Glomski gayle@pagespringscellars.com or 928-639-3004, ext. 226. For more information about Verde Valley Sanctuary’s Desert Rose Court, a transitional housing complex, please contact Tracey McConnell, Development Director, at tracey@verdevalleysanctuary.org, 928-282-2755, or visit their website, VerdeValleySanctuary.org.