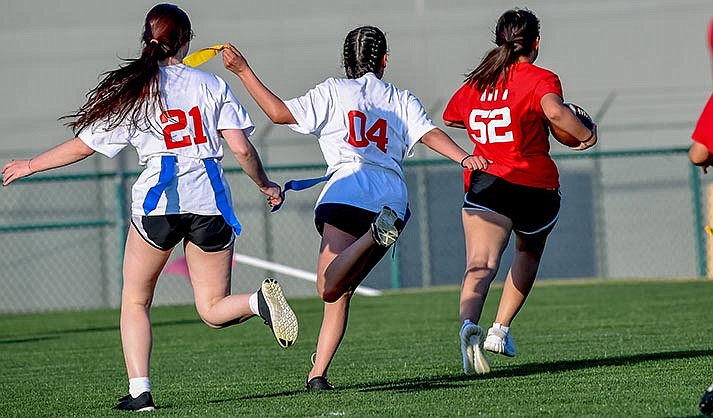 Girls' flag football has been sanctioned by the AIA for an inaugural season in the fall of 2023. (Adobe/stock)

Monday, the Arizona Interscholastic Association’s Executive Board voted to establish girls’ flag football as the association’s newest sanctioned sport. The first season of play will be the fall of 2023.

Flag football was established as a sanctioned sport instead of an emerging sport as data collected showed a significant number of schools will be able to field a team in the inaugural season, and that number should continue to grow.

“We’re excited the Executive Board has approved girls’ flag football as a sanctioned sport. We’ll have a state championship in year No. 1,” said AIA Executive Director David Hines. “Our hope is to see fast growth of the sport within the membership.”

The AIA and its Executive Board approved a fall season so its championship will coincide with the tackle football championships. Prior to sanctioning, the AIA’s member schools played flag football in the spring.

Over the past two seasons, the AIA has observed flag football leagues across the Valley that featured member schools. An exploratory committee was convened to gather information on these games and to create a rulebook. The guidelines the AIA will adopt were based on rules from other states that carry flag football, as well as Arizona-only items. For instance, Arizona rules will feature placekicking, making it the only state in the nation with this inclusion.

“Today is a significant step forward,” said Hamilton coach Matt Stone. “The AIA took chances with these rules compared to other states. We looked at a lot of different sources to compile this rulebook.”

Creating more opportunities for Arizona’s high school student-athletes is a main tenet of the association. With more states adopting flag football as a varsity sport, the hope is to have the NCAA eventually offer it. And with college inclusion comes scholarship opportunities.

“It is awesome that flag football has skipped emerging status and jumped in with both feet as a sanctioned sport,” added Rae Black, head coach for Casteel. “It’s growing fast in Arizona and we want to keep up with the other states where it is succeeding. We want to play in that stadium under the lights and get a trophy at the end. I’m glad for this initial group of girls that will get to experience this.”