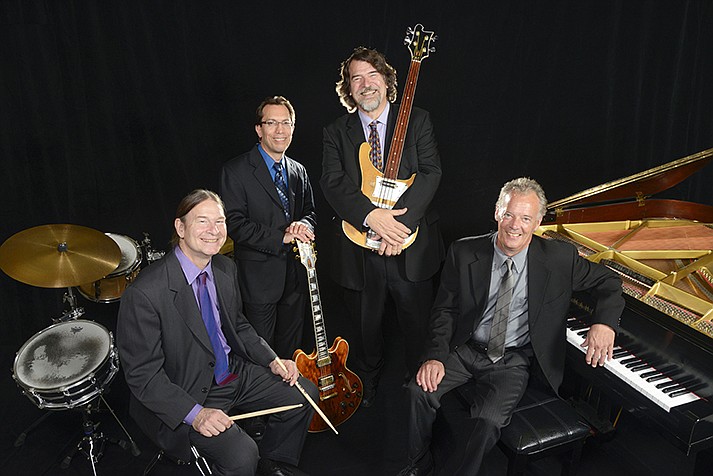 The next concert of the Red Rocks Music Festival, Dec. 17 at 3 p.m., will feature the legendary Brubeck Brothers Quartet in a multimedia production that includes videos of their father Dave Brubeck, and a performance of Take Five at the Sedona Performing Arts Center.

Chris and Dan Brubeck have been making music together practically all their lives. Drummer Dan and bassist, trombonist and composer Chris cut their first record together in 1966 — more than a half century ago. They’ve subsequently played a variety of styles in a number of different groups, as well as with their father, jazz giant Dave Brubeck, and with their own Brubeck Brothers Quartet.

With Dan and Chris as the foundation, guitarist Mike DeMicco and pianist Chuck Lamb, complete this dynamic quartet. They perform at concert series, colleges, and jazz festivals across North America and Europe including the Newport, Detroit, Montreal, Playboy/Hollywood Bowl, and Monterey Jazz Festivals.

These versatile musicians also collaborate with orchestras all across the U.S. as well as internationally. With Chris Brubeck’s compositions as a vehicle, the BBQ has performed with chamber/orchestral groups such as the St. Paul Chamber Orchestra, the Philadelphia Orchestra, the Russian National Symphony Orchestra and the Singapore Chinese Orchestra.

The group’s creativity, technique and improvisation can be heard in their uncompromising music, which reflects their dedication to melody, rhythm, culture and the spontaneous spirit of jazz.

Brubeck is equally at home playing jazz, rock, classical, funk and folk music, displaying his multiple talents on three instruments. An award-winning composer, Chris has been called “…a 21st Century Leonard Bernstein” by John von Rhein of the Chicago Tribune. Chris’s composition, “Vignettes for Nonet,” for woodwind quintet and the BBQ was commissioned by, and premiered at Bay Chamber Concerts, Rockport, Maine to great acclaim.

In addition to his instrumental work with the Brubeck Brothers Quartet, Chris tours, records and sings with his acoustic funk-blues group, Triple Play.

Drummer Daniel Brubeck is the rhythmic force of the BBQ and has toured the international music circuit for more than two decades. He has led his own group The Dolphins, in addition to performing with the legendary Dave Brubeck Quartet.

Dan also plays with the Vancouver-based Dan Brubeck Quartet (DBQ), featuring vocalist/bassist Adam Thomas. The DBQ released Celebrating the Music and Lyrics of Dave and Iola Brubeck, which showcases his father’s music and little-known lyrics of his mother.

As a featured soloist with many of the world’s top jazz artists, Dan’s original drumming style and use of odd-time signatures have earned him international acclaim.

Guitarist and composer for the Brubeck Brothers Quartet (BBQ), Mike DeMicco has toured extensively worldwide since 1980. He grew up in the arts colony of Woodstock, New York, immersed in blues, jazz and rock music. His musical diversity has since led him to work with celebrated artists in many genres. For 10 years, he performed and recorded with the acclaimed electric jazz quartet, The Dolphins, featuring Dan Brubeck; he has also recorded with Warren Bernhardt, Peter Erskine, Michael Franks, and James & Livingston Taylor, among many others.

Chuck Lamb, pianist, composer and percussionist, co-founded the group Dry Jack, which was cited in the Rolling Stone History of Music as a premiere, cutting-edge jazz fusion group. He has garnered global acclaim including accolades for his creativity and expertise from a variety of publications including Billboard and Keyboard magazine, The New York Times, and The Los Angeles Times. He has played with many musical greats including the Woody Herman Orchestra, Bela Fleck, Dave Holland, Eddie Jefferson, Ginger Baker, Tom Harrell, and Ernestine Anderson.