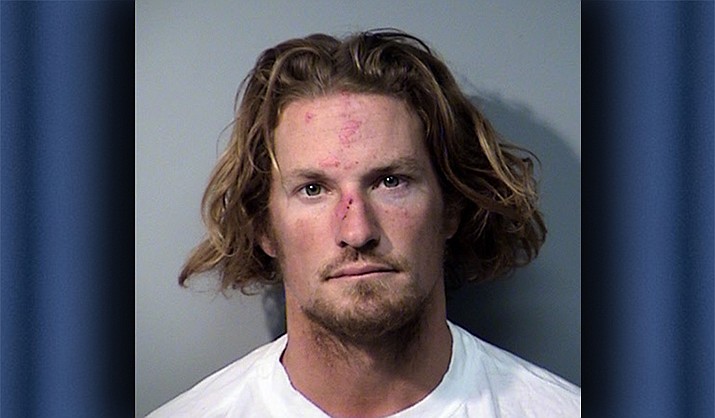 Named as a person of interest in the felony assault of a U.S. Forest Service agent, Jonathan Kip Medford was reportedly found in a Jerome apartment.

Federal and county law enforcement had been searching for Medford since the incident Tuesday. A Forest Service employee was allegedly assaulted at a camp site near the Palatki Ruins, and the suspect fled on foot. Officers searched by ground and air.

Jerome Police Chief Allen Muma said his department had received a tip Tuesday evening that Medford was renting an apartment on East Avenue in town, but he was not there when officers checked.

According to information released by JPD, officers returned to apartment at Wednesday at 2:50 p.m. The chief and two officers organized the apprehension. Muma said Medford spotted them at the same time they saw him in a window.

“He darted out the back, but there was nowhere to go,” Muma said.

Jerome Police also stated Medford was with two females from out of state who had given him a ride out of the original search area after he had lied to them about his car breaking down and needing a ride back to his apartment.

Muma said the young women were stunned to see police officers with weapons drawn come through the apartment. JPD also noted the suspect may have tried to escape again even after being handcuffed by manipulating his cuffed hands to the front right after they put him in a police vehicle.

After that, they put him in belly chains. “I had a bad feeling about that guy,” Muma said.