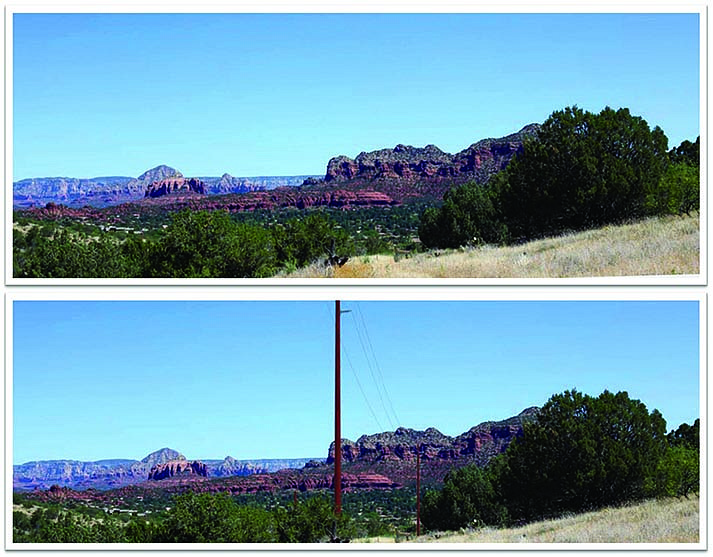 View looking north from the Kel Fox Trail. Top photo shows existing condition, and bottom image shows view with simulated above-ground 69kV powerline, one of two alternatives studied by the USFS. The project depicted in the simulation reflects preliminary siting information. Typical pole height is shown at 65 feet, but may range from 54.5 to 72.5 feet. Final pole placement and height may vary based on final engineering and design. (NOTE: USFS images, for illustrative purposes only.)

The APS 69kV Power Line Project is a proposal for the authorization of a long-term special use permit to construct, operate, and maintain a 13.7-mile long power line between the existing Village of Oak Creek and McGuireville substations, to be tapped in the event of power outages in either community.

“We appreciate the Forest Service’s efforts in seeking extensive public feedback on this proposal, which has the potential of significantly blocking scenic view corridors in and around the Village of Oak Creek,” BPRC President Camille Cox said. “However, our surveys and forums have reflected strong community opposition to a specific project alternative, originally proposed by APS, that would entail construction of the powerline strung across approximately 250 ‘self-weathering’ steel structures, spaced roughly 88-yards apart.”

Instead, Cox said that the Council generally supports a second alternative under study by the Forest Service that would require burial of nearly the entire length of the powerline in a six-foot deep, three-foot wide trench. This option would preserve the spectacular red rock views for residents and tourists alike, she said, while also protecting property values and reducing the threat of wildfires caused by downed or arcing powerlines. Additionally, the draft EA revealed that the long-term maintenance cost of an overhead powerline is far greater than a buried powerline – an expense that is passed through to rate-payers.

A committee of volunteers is reviewing the 120-page draft EA and related background materials. The Council’s letter will be based upon a position statement overwhelmingly approved by Council representatives earlier this year that recommends burial of the line in critical scenic corridors, including inside the Village and along Kel Fox Trail and Beaverhead Flat Road.

Cox also expressed concern with the burial option that, as proposed, would nonetheless allow for above-ground construction of the 65-foot high powerline in the scenic and heavily used Highway 179 corridor through the Village.

The Draft EA, which details project alternatives and discloses potential effects of the alternatives, is available for review and public comment at https://www.fs.usda.gov/project/?project=56977. Based on the EA analysis, the Coconino National Forest Supervisor will decide whether to allow implementation of one of the two alternatives studied, a blend of the two, or deny a permit.

Individuals who wish to comment may email the Coconino National Forest’s Flagstaff office at comments-southwestern-coconino@usda.gov or send a letter to its office at 1824 S. Thompson St., Flagstaff, AZ 86001.