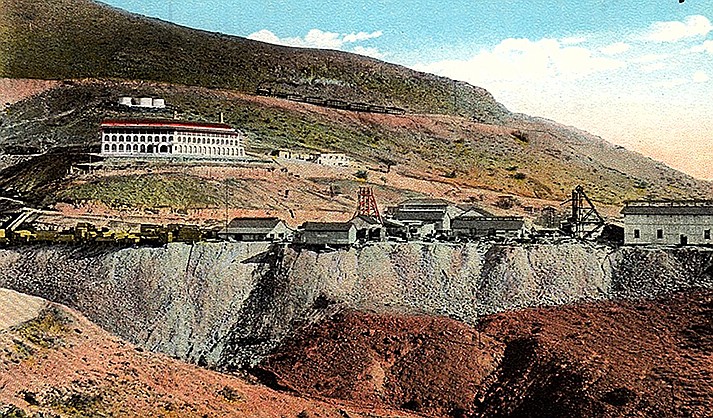 The Little Daisy Hotel and some homes for executives were constructed above the industrial buildings of the United Verde Extension Mining Company where the Audrey Shaft Headframe and the Edith Shaft Headframe are the tallest structures. High on the hill the train is traveling toward Jerome.

“The whole United Verde Extension company showed a pile of style on the occasion of the ‘blowing in’ of their new hotel” on New Year’s Day.

The United Verde Extension Mining Company (UVX) housewarming reception at their Little Daisy Hotel was a success beyond the wildest expectations of anyone concerned. Over 600 people were in the hotel at the time the cigars were passed around and the total number that partook of the Extension company’s hospitality must have been in excess of 700.

“Although the festivities were scheduled to start at 9 o’clock, the people began arriving well in advance of that hour. By 9, when the dancing began, the lobby was filled beyond the point of comfort.” Guests kept coming until after 10.

“The congestion in the lobby was relieved somewhat when some 150 people were admitted to the dining room. When all were seated at the 4 long tables, Attorney A. H. Favour, of Prescott, made a few brief and happy remarks. Then the salad, the soup, the turkey and the other edibles were brought on by a corps of competent waitresses and joy was unconfined. The tables were set three times. Three times the big doors were thrown open and the hungry were invited to enter. The third time the tables were not quite filled.”

“Everything was lit up. Lights were blazing in every room and people wandered up stairs and down, gazing in wonder upon the comforts and conveniences the UVX company had provided for its employees.”

Host George Kingson, manager of the UVX, was there with all his assistants and subordinates, “welcoming the arriving throngs and seeing that everybody had a good time --- a light task under the circumstances. Every little while” George Whitney, L.A. Kehr, and Erle Thompson would get a few more of the Extension crowd together and they would have a little Barber Shop Chorus ‘close harmony’ for the purpose of acquainting the world with their views on George Kingson’s style

“Architect Royal Lescher, who designed the building, and T. B. Stewart, the contractor who built it, came up from Phoenix for the housewarming, and they were told over and over that they, as well as George Kingdon and the other UVX people, has shown a pile of style. In short, their handiwork was approved unreservedly.

“The remark was frequently made that ‘Douglas ought to be here.’ UVX President James Douglas, who is with the Red Cross in France, was sadly missed. Much of the credit for this hotel belongs to him, though he could not be present to hear the praises voiced so fervently.”

“Just off the lobby was the punchbowl, and it took a real man to get to the brink thereof. The punch was of that tried-and-true brand known as ‘Breath of Kentucky.’ Was it appreciated? It was.” [Arizona Prohibition began January 1, 1915.]

“People were fed on turkey with all the trimmings! Think of that! Although the crowd was far larger than Manager C. S. Richardson and his force had foreseen, they were well prepared for the deluge. The last, who didn’t push back their plates till nearly 2 o’clock, fared just as well as those who were admitted to the dining room shortly after 10.”

“When Manager Richardson was explaining his plans the other day he was asked if he did not intend to serve a buffet lunch. ‘No, it will be a “regular dinner,”’ he replied.”

“Well, that dinner last night was irregular. Not even millionaires eat food like that as a regular thing.”

“Off in one corner were Ed Laudenslager, Leonard Luv, E. Krause, and several other musicians. They were the only persons present who didn’t have a good time. The dancers simply wouldn’t let them rest. Whenever they exhibited any sign of flagging interest a storm of imperious hand clapping called them back to their jazzious labors.”

THE MAGNIFICENT BUILDING: “In beauty of outline, in convenience of arrangement and in general attractiveness the United Verde Extension hotel sets a new standard for this part of the state. It is ultra-modern right down to the last detail. Furthermore, it is as nearly fireproof as possible. Concrete is the principal material, no wood being used except about the doors and windows, the roof and sleeping porches.”

“There are 62 rooms in all and each has access to an outdoor sleeping porch. The porches are enclosed with wire screens, fly proof and mosquito proof. They are ideal places for lounging in mild weather and for sleeping in summer. All are roofed with redwood.”

“The halls and the interiors of the rooms are all kalsomined and painted a dazzling white. Black electric light fixtures instead of the usual shiny brass, afford a striking and pleasant contrast to the general brilliancy. In each room is a steel locker, a nickel-plated bed, a lavatory with hot and cold running water, a dresser and a wicker rocking chair.”

“Some of the rooms have private baths and there are 3 or 4 public tub and shower baths on each floor.”

UVX “employees are moving their effects in today and by tomorrow every room will be occupied. On the start, 70 people will be accommodated.”

After the UVX closed, the Little Daisy Hotel contents, doors, windows, roof, etc., were sold at auction. Nothing but the concrete walls and abandoned worthless items remained. It stood vacant for decades.

Walter and Lisa Acker purchased the 3.5-acre property during 1995 and began restoring the structure. Their 12,000 square-foot home has 8 bedrooms and 7 bathrooms. The porch area is 2,900 square feet. The top floor, with no roof became a 9,000 square-foot garden. There is a 2,600 square-foot garage and workshop. The Little Daisy Hotel property was sold at auction during June 2020.