Commentary: O’Halleran reflects on 1/6/21 through eyes of police 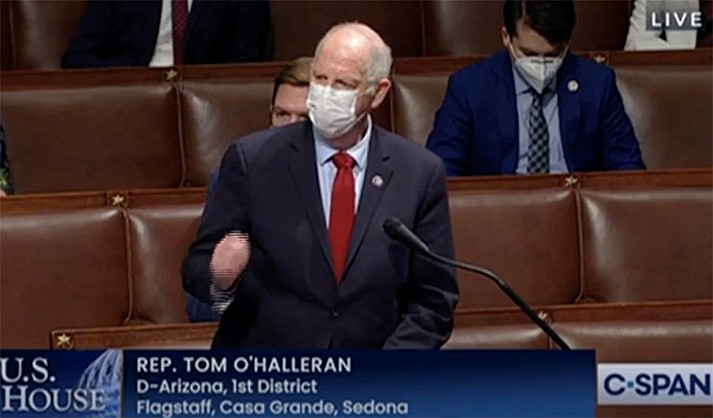 On this day one year ago, I sat on the Floor of the House of Representatives preparing to speak in support of the validity of Arizona’s election results when armed insurrectionists breached the Capitol and staff and members were rushed from the chambers. All around me I saw people running, calling out to friends, and doing what they could to help one another, their faces full of fear.

But no fear bothered me so deeply as the alarm I saw in our Capitol Police Officers’ eyes. As a former police officer and homicide detective, I’ve seen and felt fear myself. The hardworking men and women of the force sworn to protect and serve the U.S. Capitol, members, and staff knew they were under attack. They were being brutally beaten, were committing heroic and selfless acts to keep us safe, and were, quite literally, holding the line to protect our democracy.

Their faces are what I remembered most vividly when we learned later that a brave officer was lost to the violence of the day and four more to suicide later, with 140 suffering physical injuries and far more from injuries invisible. The numbers are unbelievable, unacceptable.

Among loss of life, trauma, and a nation shaken, the events of January 6, 2021, showed us the power that lies and division can truly have.

The work of the former president and his allies to undermine faith in our election process by attempting to mislead the American public only served to weaken us and make us vulnerable to foreign actors who would do us harm.

But we can heal from this, and indeed we have begun to do so. We certified the 2020 election results, have worked to rebuild trust in our democratic systems, and must continue to protect the right to vote and the power of each American’s vote. We can only do this by working together—continuing to show up to the table, striving to understand one another, and putting aside partisan differences to improve the lives of all Americans.

Thus, as we reflect on the anniversary and the pain of this dark day, we must also think of the strength of what our nation can be—the unity we can work to build in our own communities that will create a wholly less divided America.

I am proud to be part of a Congress that resolved to reconvene as soon as possible on this day last year to finish what we started. We could not, and did not, let anything stop us from serving the American people and fulfilling our constitutional duty. I never will.

Tom O’Halleran (D) represents Arizona’s Congressional District 1 in the U.S. House of Representatives. He lives in the Village of Oak Creek.