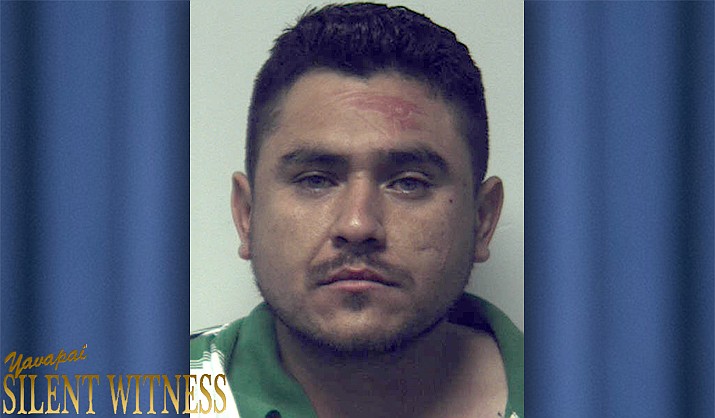 In the early morning hours of April 16, 2018, the Diaz-Moreno entered the home of a woman he previously had threatened to kill. He trespassed on the victim’s property in the 7000 block of Horseshoe Lane in Prescott Valley by going through a window into a room where the victim’s infant child was sleeping. The child awoke screaming upon seeing the intruder. The victim called police while screaming at him to leave. Diaz-Moreno fled and was not located at the scene.

He is currently wanted on a nationwide extraditable warrant for Criminal Trespass out of Yavapai County, and a full extradition warrant with a $20,000 bond for possession of dangerous drugs for sale, possession of narcotics for sale, weapons misconduct, unlawful flight from law enforcement and criminal trespass out of Maricopa County.

Diaz-Moreno is described as a 36-year-old Hispanic male, 5-foot-6, 190 pounds, with black hair and green eyes. He also has multiple tattoos to include his name on his back and has large scars on his abdomen and lower left leg. His last known address was on Hillward East in Congress.

If you provide information leading to Diaz-Moreno’s arrest, you could earn a $500 cash reward. Call Yavapai Silent Witness at 1-800-932-3232 or submit a tip at www.yavapaisw.com. All calls are completely anonymous. You never have to give your name.