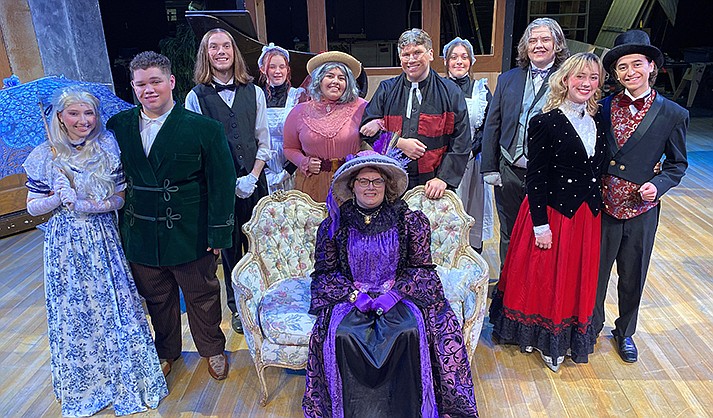 The cast of Mingus Union ATORT’s production of “The Importance of Being Earnest” is ready to take the stage Jan. 15. (Courtesy photo)

COTTONWOOD – The award-winning ATORT theater troupe of Mingus Union High School is gearing up for its winter production of the classic comedy “The Importance of Being Earnest” by Oscar Wilde, according to a press release from the organization.

“Since winning our state competition for our previous show, these actors are excited to present this classic comedy to our community,” director James Ball said in a news release.

The show will run weekends Jan. 15-23 in the Mingus Auditorium.

In the plot, John Worthing, a carefree young gentleman, invents a fictitious brother, “Ernest,” whose wicked ways afford John an excuse to leave his country home from time to time and journey to London, where he stays with his close friend and confidant, Algernon Moncrieff. Algernon has a cousin, Gwendolen Fairfax, with whom John is deeply in love.

During his London sojourns, John, under the name Ernest, has won Gwendolen’s love, for she strongly desires to marry someone with the confidence-inspiring name of Ernest. But when he asks for Gwendolen’s hand from the formidable Lady Bracknell, John finds he must reveal he is a foundling who was left in a handbag at Victoria Station. This is very disturbing to Lady Bracknell, who insists that he produce at least one parent before she consents to the marriage.

Returning to the country home where he lives with his ward Cecily Cardew and her governess Miss Prism, John finds that Algernon has also arrived under the identity of the nonexistent brother Ernest. Algernon falls madly in love with the beautiful Cecily, who has long been enamored of the mysterious, fascinating brother Ernest. With the arrival of Lady Bracknell and Gwendolen, chaos erupts and hilarity ensues.

This show is rated PG. While the content is appropriate, due to the style of the play, it may not keep in interest of younger children.

Tickets can be bought online at ATORTTheatre.com or by stopping by the MUHS Bookstore weekdays from 7:30 to 3 p.m. Tickets are $11 for adults, $10 for seniors, and $8 for students and children. Tickets cost $3 more at the door, so buy early and save. If you have any questions, you may always call the box office at 928-649-4466 or e-mail jball@muhs.com.

This show is brought to you by ATORT (A Troupe Of Ridiculous Thespians) led by Ball, assistant and tech director Audrey Young, and costume designer Lydia Collins.