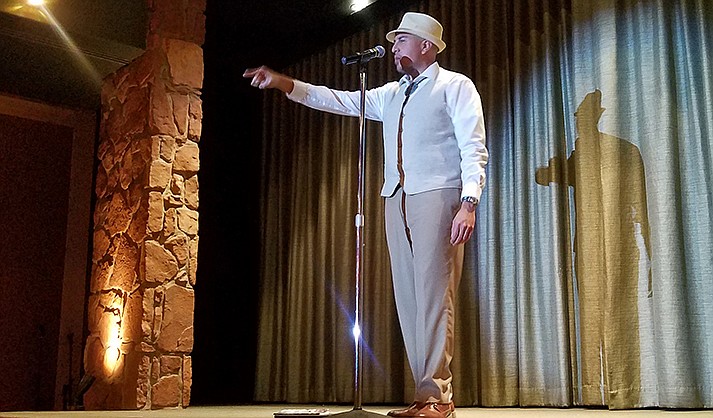 Damien Flores, of Albuquerque, performs at the Sedona Poetry Slam in November. A published author and teacher, Flores was the guest featured poet between competitive rounds. (Courtesy photo)

With 2021 in the rearview and 2022 on the horizon, the Sedona Poetry Slam enters its 14th year of performance poets bringing high-energy, competitive spoken word to the Mary D. Fisher Theatre starting at 7:30 p.m. Saturday, Jan. 15.

Slam poetry is an art form that allows written page poets to share their work alongside theatrical performers, hip-hop artists and lyricists. Poets come from as far away as Phoenix, Tucson and Flagstaff, competing against adult poets from Sedona and Cottonwood, college poets from Northern Arizona University and youth poets from Sedona Red Rock High School. All types of poetry are welcome on the stage, from street-wise hip-hop and narrative performance poems, to political rants and introspective confessionals. Any poem is a "slam" poem if performed in a competition. All poets get three minutes per round to entertain and inspire the audience with their creativity.

The Sedona Poetry Slam held two competitions in October and November. The upcoming poetry slams of the season will be held Saturdays, March 5, featuring Bernard "The Klute" Schober, of Phoenix; April 23; and Saturday, May 14.

Email FoxThePoet@yahoo.com to sign up early to compete or by the Friday before the slam or at the door the day of the slam. Poets who want to compete should purchase a ticket in case the roster is filled before they arrive.

What is Poetry Slam?

Founded at the Green Mill Tavern in Chicago in 1984 by Marc Smith, poetry slam is a competitive artistic sport designed to get people who would otherwise never go to a poetry reading excited about the art form when it becomes a high-energy competition. Poetry slams are judged by five randomly chosen members of the audience who assign numerical value to individual poets' contents and performances.

Poetry slam has become an international artistic sport, with more than 100 major poetry slams in the United States, Canada, Australia and Western Europe. Slam poets have opened at the Winter Olympics, performed at the White House and at the United Nations General Assembly and were featured on "Russell Simmons' Def Poets" on HBO.