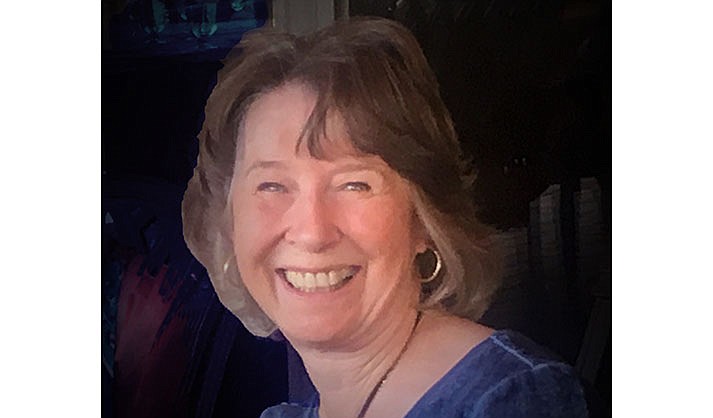 Donna Michaels explained her position with respect to a number of issues facing the Village. She began with the proposed APS 69KV powerline project, noting that while we need to have power available, it is important that local utilities embrace stewardship of the environment and public safety by preserving our iconic scenic views and mitigating the potential fire dangers that a substation and overhead wires present.

She then reviewed the water crisis facing rural Arizona and the steps taken by the Board of Supervisors in their Proclamation in Support of Water Certainty. On recycling, she feels that Yavapai County has made a commitment to the community and is working to find a way to reinstate the recycling centers that were closed.  A powerful four-minute video has been created that OHV users are now required to watch and sign that they understand the terms of vehicle use. Supervisor Michaels would like to see on Verifiable Violations that a fine be imposed similar to the charge for rolling over an OHV.

The funds collected from these fines would be used to restore the damage to the land.

Isaac Dudley, Flows Project Manager, Friends of the Verde River emphasized that conservation does not end at the riverbanks.  Friends of the Verde River’s mission is to work collaboratively for a healthy flowing Verde River system, noting that river flow has been declining since the 1990’s. One of the ways to improve is with their certification programs that recognize river friendly homes, farms, businesses and new developments.  Their goal is to inspire a culture of river friendly conservation.

Camille Cox reviewed the comment letter sent to ADOT on behalf of the Council regarding plans to rebuild the bridge at I-17 and SR179. The BPRCC letter stressed safety concerns and suggested specific areas of improvement that could be done during reconstruction. Visibility of southbound traffic exiting onto SR 179 to traffic exiting I-17 northbound needs improvement, as do the acceleration and deceleration lanes of I-17 exiting northbound and entering southbound.

Mary Pope reported that 693 responses were received, 86% being full time residents and 88.7% indicating that recycling is very important.  The full report has been shared with the Council representatives, Yavapai County Supervisors and Sedona Recycles.  We will monitor the County’s progress in restoring recycling to the VOC and report back to the Council.

Mary Morris noted that the revised use permit submitted by the Collective appears to have taken community comments from their pre-application citizen participation meeting into consideration.  She expects the committee to review the application and have a recommendation ready for Council review within the County’s timeframe for receipt of comments on the application.

Duane Thompson informed the Council that a final recommendation is expected from the USFS August/September. The USFS is aware that interest in this project remains high and that the feasibility of a community microgrid is being examined.

Curt Schneider noted that the Star Party held May 22 at the Hilton was attended by over 150 people and was a great success. Updating the Yavapai County lighting ordinance is on hold until the County’s Comprehensive Plan is done.

Lenore Hemingway affirmed that the committee has completed a SWOT analysis of the organization and will have a guidance document for the nominating committee ready to be reviewed at the July 14 Council meeting.

Art in the Roundabouts:

The Council approved a final letter of intent to begin collaboration with the Sedona Village Partnership. Rolf Funk encouraged those interested in serving on the committee to get an application by emailing info@bigparkcouncil.org.

The Sedona Sister Cities Association have completed development of their selection criteria and begun the search for a sister city.

The BPRCC Community Plan committee found that over 50% of VOC households include dogs and that a dog park is a highly desired amenity. An organization (Big Park for Dogs) has been created to make this happen.

Although Yavapai County is working towards improved broadband access to underserved communities, the VOC is not considered to be one of these.

The Sedona Village Partnership is accepting nominations for its Shining Star Award. Nominations are due by 7/31 and must exemplify their core values to connect, educate, respect, collaborate and accomplish.