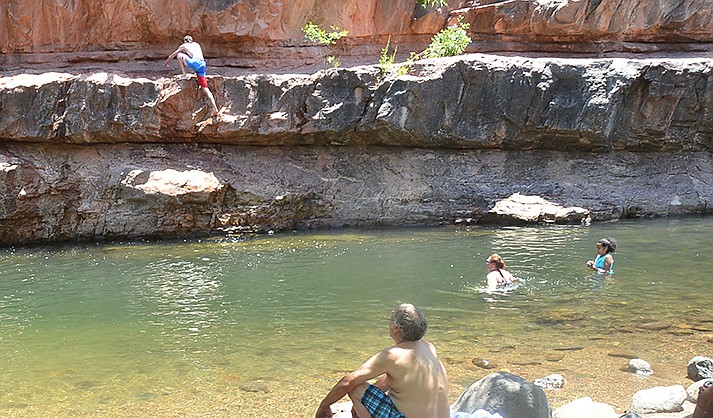 Swimming holes such as this one are popular on Oak Creek in Sedona. A man drowned July 9 at another swimming hole further up State Route 89A. (File/VVN/Vyto Starinskas)

SEDONA – The Coconino County Sheriff’s Office has identified a man who drowned after jumping into Oak Creek on Saturday, July 9.

Austin Smith, 36, who was from the Phoenix area, was found under a ledge in the flowing water of Oak Creek by Sedona Fire department crews about an hour and a half after he went in the water, according to Jon Paxton of CCSO on Monday, July 11.

The death comes two week after a similar incident at Red Rock Crossing on Oak Creek.

The individual on Saturday had been jumping from rocks 15 feet off the water multiple times prior to this last jump, Paxton said. “But this time he did not surface.”

People swam out to that spot but they couldn’t see him under the murky water.

The Sedona Fire District was finally able to locate him.

The swimming hole is near a pull-off for cars just south of the Manzanita campground.

“It was very tragic,” he said.

The family was on the scene.

Paxton said they don’t know what happened, but he went in “feet first” and it wasn’t a collision with a rock.

About 10 to 15 people were involved in the search, including Coconino Search and Rescue.

When they were looking for him, the water was so dark that people couldn’t see anything below, Paxton pointed out.

Concerning the man pulled out of the water at Red Rock Crossing on June 29, none of the involved emergency agencies could provide updated information.