‘Johnny Guitar’ screening part of Day of the Cowboy 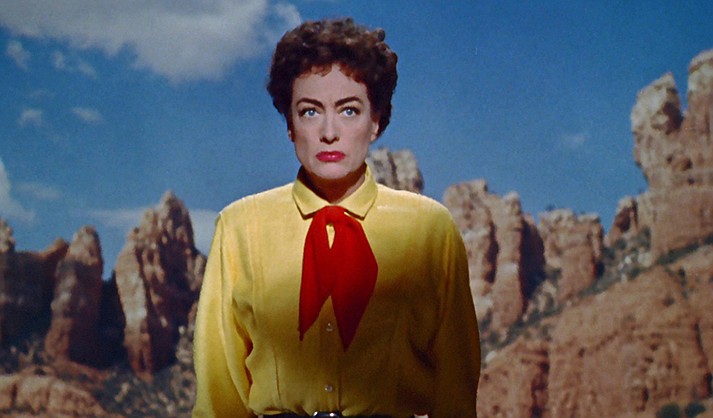 The Sedona Historical Society will celebrate “National Day of the Cowboy” with the screening of this vintage western film made in Sedona: “Johnny Guitar” — starring Joan Crawford, Sterling Hayden, Mercedes McCambridge, Ernest Borgnine and John Carradine. (Image courtesy of SIFF)

The Sedona International Film Festival is proud partner with the Sedona Historical Society to celebrate the National Day of the Cowboy with a special screening of “Johnny Guitar” on Saturday, July 23 at 3 p.m. at the Mary D. Fisher Theatre.

Join us for an afternoon of Sedona movie history and entertainment.

A psychological western drama ahead of its time where the bosses in conflict are both women leading gangs of men. Spoiler alert – it was perhaps the first movie to include a gunfight between two women. It has a stylized quirkiness and pace of a good film noir, and has attracted a cult following over the years. Some say the drama behind the scenes was as melodramatic as that on screen, with stories of jealousy, power plays and alcohol abuse.

The audience will enjoy local scenery shot in color, including locations like the Jordan irrigation ditch turned into a waterfall and a saloon on a rock near where the Chapel would be built a couple years later. Stars include Joan Crawford, Sterling Hayden, Mercedes McCambridge, Ernest Borgnine and John Carradine.

The Sedona Historical Society will celebrate “National Day of the Cowboy” with the screening of this vintage western film made in Sedona.

The afternoon of Sedona movie history will begin with a discussion to share background and stories about the making of the film in Sedona, including Hollywood’s introduction to modern Native Americans. Then, “Johnny Guitar” — a western film set in Sedona — will play.

Tickets are $20 each. Proceeds will benefit the Society’s historic Schuerman Homestead House restoration project. SWAG bags for all attendees, along with door prizes will be part of the fun.

Visit SedonaFilmFestival.org to order tickets online or for more information. Call the film festival office at 928-282-1177 to order by phone. The office and theatre are located at 2030 W. SR 89A in West Sedona.