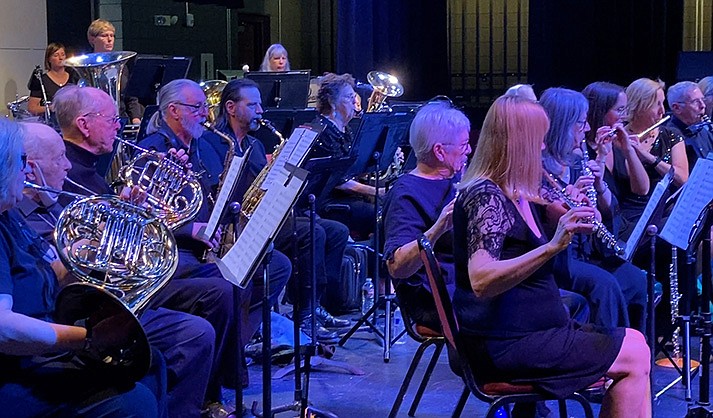 However, with the recently expanding curriculum and programs on school property, this free space became necessary for the students (for whom the room was originally designated). It seemed CCB would be without a home.

Yet Cottonwood-Oak Creek School District Superintendent Steve King knew there had to be a way to accommodate both groups.

“We are a community-minded organization,” said King. “We wanted to find a solution that fit everybody’s needs.”

In a true Solomon approach, the leader took action. He offered a new rehearsal area within the historic district office gym adjacent to the Clemenceau Museum. “We’re also looking for greater collaboration with the Community Band to expand our music programs within our school district.”

King said he is proud to have the Cottonwood Community Band nearby. “It’s very difficult to find music teachers. We have many after-school programs for children; we’d like to see more music programs [in our community].”

Since 2009, Kinnamon has been playing the trumpet with a talented cast that meets at various times throughout the years. Some even travel back and forth from places like Minnesota and Michigan, as weather permits.

“It’s a seasonal shift, as people come and go,” he said.

Kinnamon, with over 40 years of experience, is always delighted at the prospect of new musicians joining up. His crew usually fluctuates between 30 and 50 musicians, on average. He hopes when the dust settles, it will bring in some fresh new players.

“Our next scheduled rehearsal is on Aug. 15,” he said. “If there are any musicians in the community that we don’t know of, I’d like to flush ‘em out. People who played in their high school band, and thought that was fun, might want to pick it back up again.”

Band recently performed a Fourth of July concert in Clarkdale and has a fall concert and Christmas concert scheduled.

Not long ago, Jeff Bowell applied for a CCB position (at the suggestion of Shawn, his wife of 43 years) and was very eager to progress with the band as their new conductor. Bowell has been a musician for most of his life, which includes over two decades of prestigious military service in both the Army and Air Force.

“I jumped at the chance to be able to play with this talented group,” Bowell said.

Because bringing people together is what music is all about.