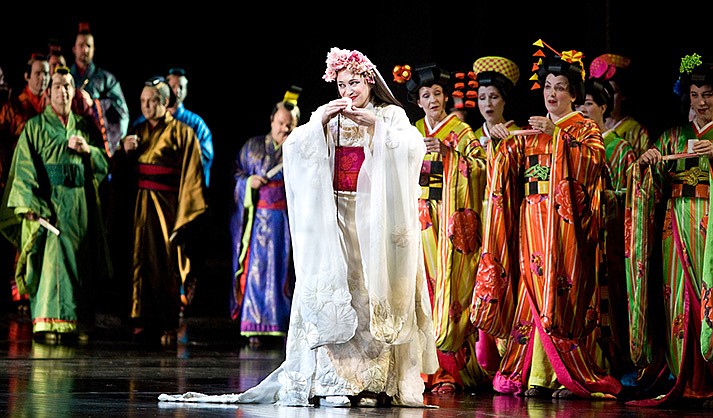 Anthony Minghella’s stunning production of Puccini’s opera stars soprano Patricia Racette as Cio-Cio-San, the trusting and innocent young geisha. She disastrously falls in love with American Navy lieutenant B.F. Pinkerton, sung by tenor Marcello Giordani, only to be abandoned by him.

The Sedona International Film Festival is proud to present the summer encore of the Met Opera’s “Madama Butterfly” (from the 2008-09 season) on Saturday, July 30 at 1 p.m. at the Mary D. Fisher Theatre.

Anthony Minghella’s stunning production of Puccini’s opera stars soprano Patricia Racette as Cio-Cio-San, the trusting and innocent young geisha. She disastrously falls in love with American Navy lieutenant B.F. Pinkerton, sung by tenor Marcello Giordani, only to be abandoned by him. Mezzo-soprano Maria Zifchak is her loyal servant, Suzuki, and baritone Dwayne Croft is Sharpless, the sympathetic American consul who does all he can but is unable to avert tragedy.

15-year-old geisha Cio-Cio-San, called Butterfly, enters into an arranged marriage with U.S. Navy Lieutenant Pinkerton. He just wants to enjoy himself, but she takes the union seriously, even converting to Christianity. On her wedding day, she endures the scorn of her entire family, who denounces her for betraying their traditional faith.

Three years later, Butterfly is still waiting for Pinkerton, who returned to America shortly after the marriage. A rich Japanese prince asks her to marry him, but she rejects his proposal, claiming that her husband has not deserted her. When the American consul Sharpless visits to break the news that Pinkerton will soon arrive with his new American wife, Butterfly triumphantly shows him her young son. Sharpless can’t bring himself to tell her the truth. Pinkerton’s ship lands at the harbor, and Butterfly, her maid, and the child settle into an all-night vigil.

Dawn breaks, and Butterfly is still waiting. When she is confronted with the truth in the person of Kate Pinkerton, she agrees to give up her child if Pinkerton will come for him. Knowing that she cannot continue to live without honor, she says goodbye to her son, blindfolds him, and kills herself as Pinkerton arrives, calling her name.

“Madama Butterfly” from the Metropolitan Opera will be shown at the Mary D. Fisher Theatre on Saturday, July 30 at 1:00 p.m. Tickets are $15, or $12.50 for Film Festival members. Tickets are available in advance at the Sedona International Film Festival office or by calling 928-282-1177. Both the theatre and film festival office are located at 2030 W. Hwy. 89A, in West Sedona. For more information and to order tickets online, visit SedonaFilmFestival.org.