Take A Hike: The Bubbling Ponds at Page Springs 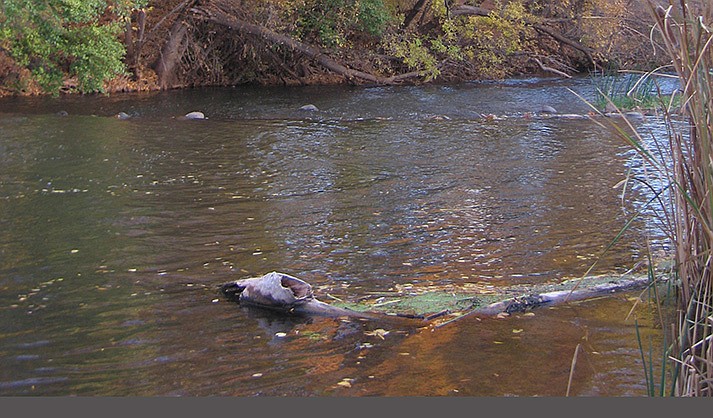 The Bubbling Ponds at Page Springs are not much of hike if you are looking to cover some distance and stretch your legs.  The network of trails branching out from the Bubbling Ponds is a wonderful place to wander about slowly, watching for wildlife.

The area is an official Audubon Society birdwatching site and features several benches for sitting and observing animals.  Much more than birds can be seen here, mammals such as deer, beaver and bobcat have all been spotted along this lush riparian zone.

I would advise looking up in the treetops as soon as you get of your car.  I have often spotted hawks and other raptors perched atop the trees and telephone poles in the Bubbling Ponds parking lot.  Close your eyes and listen, often the air is filled with bird song such as the melodious warbling of the curve billed thrasher. The Bubbling Ponds themselves are not much to look at, man made pools, some of them are nothing more than concrete lined trenches.  They do attract a lot waterfowl such as ducks, coots, mergansers and others.  There is also often a variety of herons such as the black crowned night heron, little blue heron and great blue herons.

There is a large pavilion and signs put up by the Audubon Society listing all the types of species one might see.  The list of birds is long and impressive including western meadowlark, lazuli bunting, green tailed towhee, hummingbirds and woodpeckers.  Near the corner of the last bubbling pond is a small gate which marks the beginning of the Black Hawk Trail.  The Black Hawk Trail is a loop which covers 1.8 miles.  This trail winds through a mesquite bosque and you will often see plenty of small birds fluttering through the underbrush, scrub jays, western mountain bluebirds and even red cardinals.  This is another good spot to sit, close your eyes and listen, sometimes to avian warblings and other times to peaceful silence.

The trail winds around the edge of the property, half nature preserve and half government work site but as you exit the mesquite forest and enter into open space one gets a view of the heron tree.  Between herons on the ground and herons perched in the uppermost branches I have seen groups of great blue herons numbering in the teens on several occasions.  And of course, on other occasions seen no blue herons at all.

There is a viewing deck on the edge of some grassy marshlands.  Besides being a wonderful place to view little chirping birds I have also seen deer here and the occasional bobcat as well.  Shortly after this the trail crosses a gate, approaching the river.  You can tell exactly where the river is because it is lined with great big cottonwood trees.  Before you approach the river, take a moment to scan the tops of those trees for raptors such as osprey or even bald eagles.  In the right seasons, those treetops might hold flocks of migrating songbirds.  These big beautiful trees are Fremont Cottonwoods and they are an indicator species, providing homes, shelter, and food for nesting birds, insects, lizards, spiders, raccoons, squirrels as well as protecting seedling and wildflowers.

After a gate the trail splits, the Willow Point Loop cover another half mile, following the historic old canal, before giving river access.  There are other paths which lead more directly to the river.  A pair of belted kingfisher nest along this stretch of the river.  One time I was sitting by the river and reading when a beaver went swimming by, so close I could have reached out and touched him.  Another time I passed two fishermen along the shore before eventually coming to a spot where I could watch a great blue heron in the current.  In just a few minutes the blue heron gulped down two giant trout.  On my way back out I passed the two fishermen.  I asked how it was going and one replied “There aren’t no fish in this river.”  The heron had a different opinion.

The network of trails along the Bubbling Ponds can be reached off Page Springs Road, just west of the bridge.