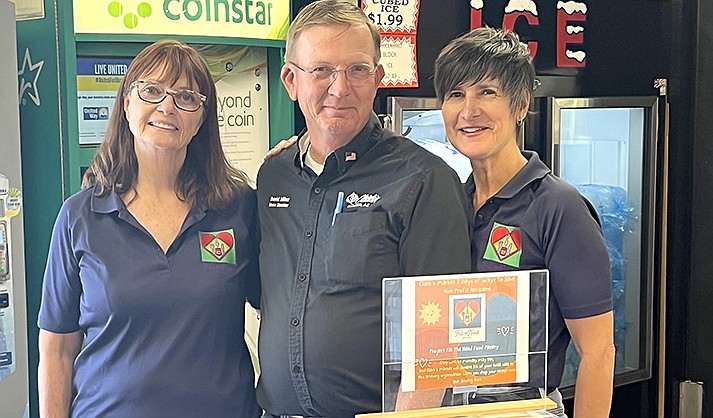 Clark’s Market joined the Project Fill the Need food pantry in the Village of Oak Creek.

VILLAGE OF OAK CREEK – Project Fill the Need, a nonprofit food pantry that opened in the Village of Oak Creek in September, has partnered with two local businesses as part of its efforts to help those living in the unincorporated communities of the Verde Valley who are not served by an existing food pantry.

Clark’s Market and pet food and supply store Feathers and Fur have become the first two commercial firms to join in the food pantry’s mission to ensure that any underserved resident of the Verde Valley has access to quality food.

Dave Miller, Manager of Clark’s Market in the VOC, invited Project Fill the Need to be one of the local nonprofit organizations that benefits from the store’s semi-annual “7 Days of Ways to Save” promotion, held this year from April 24 to May 28. The store invites shoppers to place their grocery store receipts in a clear plastic box on the designated nonprofit Mondays during that period.

The nonprofit organization gets an opportunity to talk with shoppers — local and non-local — about their group’s mission and activities. At the end of the day, Clark’s Market totals up the receipts and donates five percent of its receipts to the group. This year, the promotion kicked off with the Sedona Public Library. The Project Fill the Need effort will be a big boost for the food pantry at a time when the organization is purchasing certain types of non-perishable food, such as canned chicken and shelf stable milk, to add to the items it receives from the public.

“Those items go fast,” said Kathy Wozniak, president. “They are expensive, provide a healthy source of protein, and are in high demand.”

Clark’s Market has a record of helping the local community, starting in November 1978 when owner Tom Clark Sr. opened his first store in Aspen, Colorado, and made it part of his retail business model. In the early 1990s, Clark’s Market began purchasing other small grocery stores in Colorado, Utah, and Arizona. Jake and Leann Weber, who opened Weber’s IGA in the Village of Oak Creek in 1985, sold their store to Clark’s Market in 2017. There are now 8 stores in the chain, which calls itself “Hometown Proud.”

In addition to the store receipt promotion, Clark’s Market has also joined the Rotary Club in its Grocery Grab promotion, which was won this year by the Verde Valley Sanctuary. Tickets are sold to individuals and groups, with the winning ticket holder given 5 minutes to cruise a grocery cart through the store filling it up with food.

Feathers and Fur Pet Supply, owned by Roxanne Genaro, focuses on researching healthy pet food, keeping customers up to date on product recalls; and providing exceptional customer service. In this case, that means helping individuals and families in need with quality pet food, usually in the form of samples of dry food provided by its vendors, along with canned pet food. 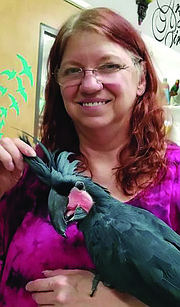 Roxanne Genaro of Feathers and Fur

Like Clark’s Market, Feathers and Fur has a long history of serving the community, supporting local animal shelters like the Verde Valley Humane Society, animal welfare organizations like Red Rose Inspiration for Animals, and even sending pet food to the Navajo Nation through the Cottonwood rescue group Big Luck Club. They have also helped raise funds for the Runnin W Wildlife Center.

Although Project Fill the Need occasionally receives a few individual cans of pet food or a small bag of dry food each month as part of the donations contributed by the public, the group’s board has made an effort to make sure its clients also feed their animals quality dog and cat food and treats, just as they work toward providing nutritious food for people. That’s where Genaro and Feather and Fur come in.

“Roxanne is known through the Verde Valley for her dedication to animals, and for making sure that her store sells the most nutritious food and safe supplies she can find,” said Jacqueline Vaughn, a member of the Project Fill the Need board and a longtime friend of Genaro. “She is not shy about asking big companies like Nulo and smaller companies that make specialized pet foods to donate to us. We take boxes of food to the pantry every month, thanks to her generous spirit.”

Wozniak hopes that other local businesses will partner with the food pantry as they hear about the non-profit’s needs and the work they are doing. “These companies have really helped us get off to a great start in the community,” she says. And we expect to work with them as we continue to increase the number of people we serve each month.