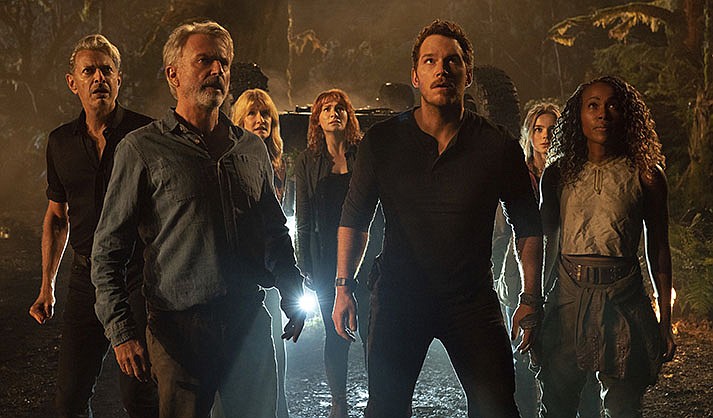 The enduring, collective love for “Jurassic Park” is immensely hard to explain.

Steven Spielberg’s 1993 film implanted itself into our cultural consciousness as a kind of platonic ideal of a blockbuster. And it wasn’t just the 10-year-olds having a formative experience at the movie theater. Most everyone, it seems, including those who were adults at the time and those who wouldn’t be born for another decade or more, has a story about just how much that movie means to them.

It doesn’t even matter how many times you watch it, or how much better special effects get: “Jurassic Park” never tarnishes, it just remains perfectly preserved in amber.

It’s hard to fault anyone for trying to recapture that magic -- a filmmaker, a studio, or an audience looking for a fun time at the movies. Even Spielberg himself had trouble. But now, somehow, we’re six movies and three decades in and about as far as one could get from the spark that made that first one so special as we supposedly bid farewell to the “Jurassic World” era with “ Jurassic World: Dominion.”

I can’t say I didn’t have some real fun with “Dominion.” There is an exceedingly well-done motorcycle chase through the streets of Taos, immense pleasure in watching Sam Neill, Laura Dern and Jeff Goldblum together again and the fun addition of a hotshot pilot played by DeWanda Wise. And there is wall-to-wall action that makes the almost two and a half hour runtime go by swiftly. But I also can’t say that I didn’t burst out laughing several times at parts that were not designed to be funny.

“Jurassic World: Dominion” is a chaotic mishmash on an epic scale and, believe it or not, the dinosaurs (who look great) are almost beside the point. After the events of “Jurassic World: Fallen Kingdom,” dinosaurs are just...around. There’s even a black-market operation in Taos that is so elaborate, you’d think we were 30 years into a post-dino dystopia and not just several years after dinos escaped into the wild.

But, again, “Dominion” isn’t really about the dinosaurs. It’s about locusts and tech giants.

A company called Biosin is the big bad here and it’s run by a man named Lewis Dodgson (now played by Campbell Scott) who, you might recall, was the guy looking to buy the embryos in the first film.

Dodgson has morphed from a sweaty Gordon Gekko-type on vacation into a Steve Jobs-ian visionary who is still up to no good and after profits. Dern’s Ellie Sattler suspects they’re behind a locust epidemic that’s destroying all the food that isn’t grown with Biosin seed and decides to use it as an excuse to team up with Neill’s Alan Grant again for the first time in years.

Conveniently, Biosin is also where Goldblum’s Ian Malcolm is an in-house public intellectual. And they’re also looking for the clone girl, Maisie (Isabella Sermon), from the last film. She’s been in hiding with Owen (Chris Pratt) and Claire (Bryce Dallas Howard) for the past few years.

There is a lot of elaborate wheel-spinning and globetrotting to get everyone to the Biosin headquarters in the Dolomites, a Bond villain complex that’s surrounded by a dino sanctuary.

It’s a lot of people too. At some points, there are eight running from dinosaurs together. Oddly, this doesn’t have the effect of upping the stakes. It’s more like watching a tour group at an experiential amusement park exhibit, which might have something to do with the lingering problem that it may not be fun to watch the dinosaurs run amok anymore, no matter how big they’ve gotten.

Colin Trevorrow is back in the director’s chair and shares a writing credit with Emily Carmichael, who adds value and wit to the proceedings, but it’s hard to say what it all adds up to. It’s fun at times and silly at others. But it doesn’t course correct enough to redeem this franchise or bring it back to Earth.