Verde Heritage: 1953: Mine Museum opens in Jerome as mines close 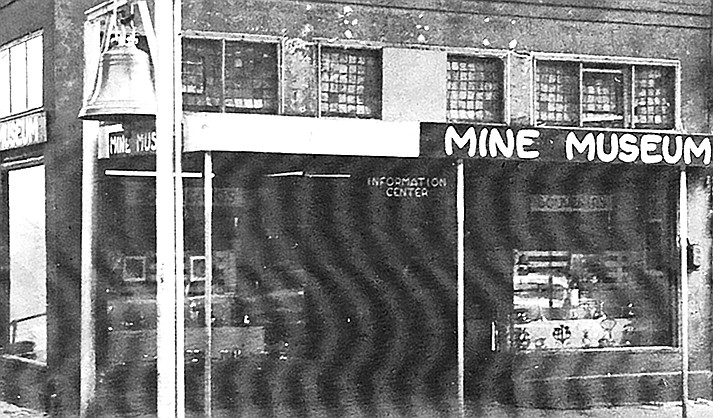 The Mine Museum, located in the center of Jerome, was painted “dusty rose” just before it opened. The small gift shop was in the front part of the building. (Photo 1967)

The creation of a comprehensive Mine Museum at Jerome was underway by the Jerome Historical Society as the Phelps Dodge Corporation was finally closing its Jerome mines and Clarkdale operations.

Although Phelps Dodge Corporation had closed their Clarkdale smelter during June of 1950, a few miners continued to bring ore up from the 4,500-foot level which was hauled for processing at the concentrators in Clarkdale. The mine was closed on March 23, 1953, leaving 17 train cars full of ore to be processed at Clarkdale. (Verde Independent; Aug. 31, 1952; Feb. 5, Mar. 26, Oct. 15, 1953.)

The Jerome Historical Society was organized on March 15, 1953. Its mission is to protect, preserve, and present the unique physical and cultural history of Jerome through its buildings, architecture, research archives, museum, and other programs. It was dedicated to the preservation of Jerome as a town of vital historical significance to the Verde Valley, to Arizona, and to the West.

The historic “Fashion Saloon” was converted into a museum. “Working at night, members of the society and volunteers among the residents of Jerome partitioned the building, erected booths, and arranged displays showing the progress of mining in the region from prehistoric to recent times.”

“The first in a series of what promises to be striking historical displays” was completed during the first part of May. “It features an oil painting by Clyde Pyne, showing a man squatting at the Camp Verde salt mine while two other men hew salt from a nearby tunnel. In front of the painting a stone axe and skull, both actually found in the mine, are displayed.”

Cottonwood artist “Clyde Pyne is at work on paintings for the next two exhibits. One will show the Spanish explorer, Espejo, arriving at the Black Hills, led by Hopi guides. The other, together with equipment, will show a prospector looking out over the Verde Valley.”

Well-known Cottonwood businessman and artist, “Ray Manley, has completed a painting for the fourth exhibit portraying the sinking of a mine shaft and removal of ore by hand windlass about 1880.”

“R. E. Lawrence, who donated the use of his power tools for work on the museum, was named head of a committee to collect old mining equipment.” He issued an appeal for donations of “mining or prospecting gear such as carbide lamps, miners’ hats, hard toe shoes, and picks. Their condition, he said, makes no difference.” (Verde Independent; May 14, 1953.)

The opening of the Mine Museum on June 20, 1953, “formally marked the end of Jerome’s era as a Bonanza City and the beginning of a new era that officials hope will make it a Meca for Tourists.”

“Jerome, once Arizona’s fourth largest city, opened as a ‘Ghost City’ with a museum designed to preserve for posterity the story of its fabulous past which overnight made poor men rich and rich men richer.”

The dedication Saturday evening included an invocation delivered by Miss Bertha May White of Haven Methodist Church, and brief speeches by Jerome’s Mayor, John McMillan, Johnie O. Moore, president of the Jerome Historical Society, sponsor of the museum, and Jim Brewer, superintendent of Tuzigoot National Monument, who was a prime mover in the organization of the non-profit society and establishment of the museum.” During the day, “Police Chief Buck Snoddy, and Jerome’s night officer, Lee Jones, would be on hand to handle the influx of traffic. There would be ample parking facilities available.”

“The museum will support itself by selling membership cards in the society for 25 cents a person, which will entitle holders to free admission to the museum for limited periods. (Verde Independent; June 18, 1953.)

A 600-pound bell hung in the old Jerome Town Hall belfry to ring out fire alarms and curfews. The bell was cast at Cincinnati, Ohio, during February of 1904, and inscribed with “Town of Jerome.” When the building was torn down, the bell was stored briefly in the city lot between Main St. and Hull Ave.

The bell was taken to the Cornville School where it was hung in the new belfry on September 17, 1929.  When the Cornville schoolhouse was abandoned in 1952, the bell was returned to Jerome.

The “Town of Jerome” bell was hung from a steel support in front of the Mine Museum during February of 1954, just 50 years later to the month from when the bell was originally cast.” (Verde Independent; Feb. 25, 1954.)

The half wheels on the sidewalk in front and at the side of the Mine Museum are halves of a flywheel from the air compressor at the United Verde Copper Company mine owned and operated after February of 1935 by the Phelps Dodge Corporation.

There were additions to the original museum displays as donations were received. In 2007, the displays were reorganized thematically to illustrate businesses, saloons, brothels, firemen and fire departments, law and order, historical timelines, and other aspects of Jerome.