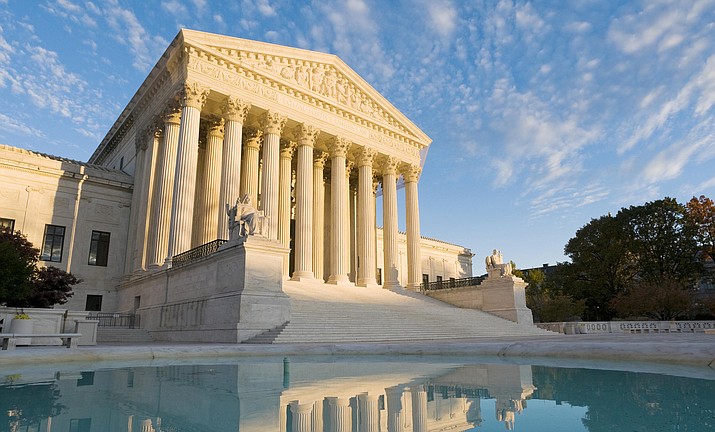 PHOENIX -- Women in the United States have no constitutional right to terminate a pregnancy, the U.S. Supreme Court ruled Friday, a decision abortion foes say immediately outlaws the procedure in Arizona.

In an extensive opinion, Justice Samuel Alito, writing for the majority, said the historic 1973 Roe v. Wade decision was built on the premise there is an inherent right of privacy in the U.S. Constitution that precludes states from criminalizing a woman's decision to abort a fetus and a medical provider's actions to help her. But he said there was -- and is -- no basis for that conclusion.

"The Constitution does not prohibit the citizens of each state from regulating or prohibiting abortion,'' he continued, a right that Roe and subsequent rulings from the court took from them. "We now overrule those decisions and return that authority to the people and their elected representatives.''

The ruling drew a stinging dissent from Justice Stephen Breyer who said the ruling discards the balance that Roe and subsequent rulings made which concluded that, prior to viability, states cannot impose a "substantial obstacle'' on a woman's right to elect the procedure.

"It says that from the very moment of fertilization, a woman has no rights to speak of,'' he wrote for himself and Justices Sonia Sotomayor and Elena Kagan. "A state can force her to bring a pregnancy to term, even at the steepest personal and familial costs.''

Saying he was "furious, disappointed, crestfallen," U.S. Rep. Tom O'Halleran (D-AZ) said anearly leak of the ruling had given the Senate "over a month to take up and pass our Women’s Health Protection Act, which would have codified the federal protections guaranteed under Roe v. Wade into law. They failed to do so.”

Arizona has a retroactive abortion ban, meaning that a pre-1973 law banning abortion at any time—with no exceptions for rape or incest—was invalidated by Roe, but is still on the books and can now be enforced.

With Roe overturned, Cathi Herrod, president of the Center for Arizona Policy contends that allows prosecutors here to once again start enforcing the law that was on the books in 1973.

That statute, which has its roots in territorial days, says anyone who "provides, supplies or administers'' any drug or uses any instrument to induce a miscarriage "shall be punished by imprisonment in the state prison for not less than two years nor more than five years.''

In 2020, the most recent year for which data is available, there were 13,186 abortions performed.

But the situation in Arizona is complicated by the fact that the state constitution, unlike its federal counterpart, does have a section specifically guaranteeing a "right to privacy.''

Several lawyers have said that provides a basis for keeping abortion legal.

"We will do everything in our power to ensure that no person seeking or assisting in abortion will spend a night in jail,'' she wrote in a Twitter post after a version of Alito's ruling was leaked last month.

In Maricopa County, however, newly appointed County Attorney Rachel Mitchell said in an interview that she will enforce the law "because it is not my role to just say I will blanket not enforce the law.''

Mitchell, however, took a more nuanced approach when asked about situations in which the pregnancy is the result of rape or incest, exceptions that do not exist in the Arizona law that dates back to 1901.

"I think those situations perhaps are where prosecutorial discretion can be exercised,'' she said.

But Julie Gunnigle, the leading Democratic candidate to replace her in November, has gone on record as saying she will not enforce the law.

"I think we need to make a strong statement not just that Arizonans won't support this but that it would be a waste of resources to prosecute people for their healthcare decisions,'' she said in an interview.

Current state Attorney General Mark Brnovich has repeatedly defended the right of the state to restrict and outlaw abortion. In fact, Brnovich, now a Republican candidate for U.S. Senate, signed on to a legal brief filed with the high court in this case urging the justices to overrule Roe v. Wade.

Among those seeking to replace him, Democrat Kris Mayes said she is the "only candidate for attorney general who is saying, even when Roe falls ... we will not prosecute women or doctors in the state of Arizona for seeking abortion or providing abortion.''

But all of that could be irrelevant if abortion providers are unwilling to risk prosecution while the legal landscape is being decided.

There's another complicating factor in Arizona.

Earlier this year the legislature approved a measure to outlaw abortion after 15 weeks of pregnancy. That was modeled after the Mississippi law that became the basis for the U.S. Supreme Court to take another look at Roe.

That law will take effect 90 days after the end of the current legislative session, meaning likely in late September or early October. And Ducey said that, as far as he's concerned, on the effective date it will supersede the pre-1973 law.

"The law of the land today in Arizona is the 15-weeks law,'' he told Capitol Media Services last month after a version of the Supreme Court's decision was leaked. "And that will remain law.''

Ducey has not disputed that the old law was never repealed. But he said that's irrelevant.

That, however, is not the interpretation of Sen. Nancy Barto, R-Phoenix. She was the sponsor of SB 1164.

"The 15-week ban does not replace the underlying law,'' she told Capitol Media Services when asked about Ducey's comments. "It makes it clear that the complete ban would go into effect if Roe is overturned.''

And Barto said that should be obvious to Ducey.

She pointed out that SB 1164, the bill he signed, actually spells out that the approval of the 15-week ban "does not repeal, by implication or otherwise, 13-3603 (the pre-1973 anti-abortion law), or any other applicable state law regulating or restricting abortion.''

"That shouldn't be news to the governor's office,'' Barto said, saying his interpretation is "not how the new law reads.''

Ducey, however, would not back down. Press aide C.J. Karamargin said the language in the new law is not what will decide the issue.

"Intent matters here,'' he said. "And we're confident that the new laws will take precedence and prevail.''

There were 636 abortions beyond 15 weeks performed in Arizona in 2020.

Even if abortion is outlawed in Arizona, none of that precludes residents from traveling to other states where there are no such restrictions or where lawmakers or voters actually have affirmatively decided to keep the procedure legal.

The Center for Reproductive Rights says the California Supreme Court recognized the legal right to abortion in 1969, four years before Roe.

Nevada voters approved a measure in 1990 protecting the legal right to abortion. And other states ranging from Washington to New York have statutes allowing women to terminate pregnancies.

There is a petition drive in Arizona to put a measure on the November ballot to protect abortion rights here.

The measure would put a "right to reproductive freedom'' in the Arizona Constitution, covering all matters relating to pregnancy.

It would bar state and local governments from interfering with that right, which would range from contraception to elective termination of a pre-viable fetus, defined as one with a reasonable chance of surviving outside the womb with or without artificial support. And it would allow abortion at any stage of pregnancy "if necessary to preserve the individual's health or life.''

But backers have an uphill fight.

They need at least 356,467 valid signatures on petitions by July 7 to just put the measure on the November ballot. And they did not launch the drive until the middle of last month, after the Roe decision was leaked.