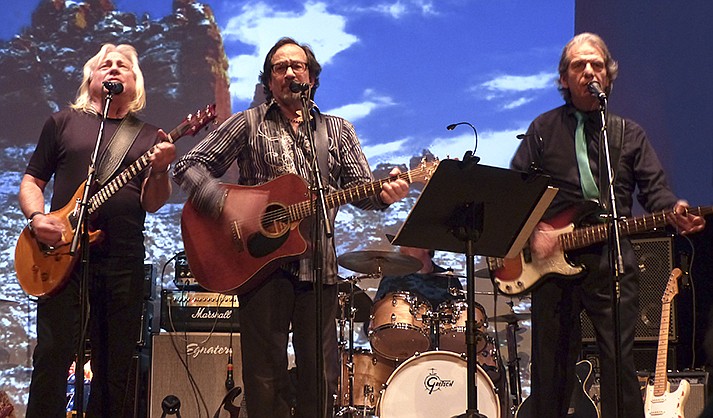 If you like to dance and enjoy original-classic rock songs sung in two and three-part harmonies, kick the Fourth of July weekend off with a bang of a band.

Founded by Sedona locals Chicky Brooklyn and Tommy Acosta, this band of baby boomers continues to rock Sedona with original music that captures and personifies the leitmotif of that generation.

“Music is magic,” lead singer Brooklyn said. “It captures our feelings better than anything else. Memories and songs are fused forever when they come together at just the right moment in our lives.”

The band plays with heart, gusto and virtuosity. They are a vocal group, a dance band and jam monsters.

On lead guitar is Sedona talent Robin Miller. Miller is a songwriter and performer with more than a dozen albums under his belt. He has played and toured and regularly performs in Sedona every week.

He brings to the Green Light table his incredible guitar skills and voice to the harmonies. His lead solos take you there and bring you back. On drums is one of Sedona’s most talented and hard-working musicians, Eddy Barattini. There is not a style he has not mastered, from jazz to hard rock and beyond.

When playing with Green Light, he adds the solidness and thump good music needs to get people up and dancing. His bass foot and the bass guitar become one and when the thick beats emerge, people get dancing.

On trombone and keyboards, it’s none other than Unclemarc Wolin. A regular performer with Naughty Bits, one of Sedona’s top bands, he brings the big-band sound of the band to the forefront.

When he whips out that big trombone of his, watch out, because things get intense and rocking, real fast.

Acosta on bass, keeps the thump, thumping and the back-beat pulsing that gets the crowd up and dancing.

Brooklyn keeps the rhythm going and never misses a beat.

Brooklyn and Acosta write and arrange the original material the band plays. They have been playing together for more than ten years and share a mutual connection, with Chicky being born and raised in Brooklyn, New York and Tommy coming from the Bronx.

They met in Arizona and began writing music together.

As fate always has it, they both ended up in Sedona and attracted some of the areas’ best musicians to play with them.

For Tommy it’s about getting the ensemble up on the Bella Vita Ristorante stage again.

“It’s great playing out and especially great to have a place our fans can come and enjoy a great meal while we play,” Tommy said. “Bella Vita Ristorante patio is perfect, and nothing makes us happier than having people dancing in front of us having a great time and singing along with our tunes.”

On Friday, July 1, and Saturday, July 2, from 6:30 to 9:30 p.m., minstrel Jerry McFarland will also be playing at Bella Vita Restaurant the July 4 weekend.

Bella Vita Ristorante is located two miles west of the Courtyard by Marriott on 89A near mile marker 368 at 6701 W. 89A.

For reservations and specific directions to the restaurant visit BellaVitaSedona.com or call 928-282-4540.