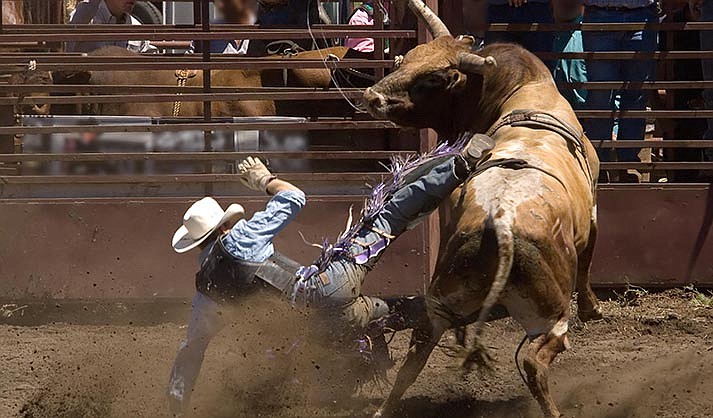 Independence Day and the Fourth of July week in Prescott is traditionally the busiest time of year that generates economic benefits for the entire region. With world-class rodeo and family-friendly events occurring for almost seven straight days, the World’s Oldest Rodeo is truly Prescott’s most anticipated event of the year.

Rodeo fans travel from all over the world to visit Prescott during Prescott Frontier Days and to be a part of rich western culture and history that stems back to July 4, 1888.

In celebrating the 50-year anniversary of the film Junior Bonner, Stuart Rosebrook, son of the late screenwriter Jeb Rosebrook, writes, “Junior Bonner, written by the late screenwriter and Orme School graduate, Jeb Rosebrook, is a deeply personal homage to family, historic Prescott and the small towns and ranchlands of Yavapai County. Fifty years ago, the city of Prescott welcomed a Hollywood film crew and helped make a Western classic.”

“It is exciting to honor the legacy of the Junior Bonner film and its rich history with the generational families of Prescott, and to also share the 50th celebration in combination with our rodeo’s 135th year that will make a rodeo celebration to remember,” said Jim Dewey Brown, general manager of Prescott Frontier Days, Inc.

The theme for the annual rodeo parade is “Celebrating 50 Years of Junior Bonner.” The parade will be held on Saturday, July 2 at 9 a.m. in downtown Prescott and is sponsored by Barrett Propane. To kick off the parade in the proper way, Prescott Frontier Days, Inc. will be presenting the parade grand marshal with special guest Chase McQueen, grandson of “Junior Bonner” star Steve McQueen.

Chase was born and raised in Los Angeles, California, to Chad McQueen and Jeanie Galbraith. He began his soccer career at the Hollywood All-Stars, then left America to play at the academy of Croatian team Dinamo Zagreb. The 27-year-old joins the parade festivities in honor of his legendary grandfather, who passed in 1980.

With record attendances and sponsor participation at an all-time high, this year will be no exception of another successful week of world-class rodeo with family activities that will make Prescott shine. This year’s performers include Justin Rumford, barrelman and PRCA “Clown of the Year”; Bobby Kerr brings his famous Mustang Act; Broken Spoke Clydesdales will be in attendance and much more excitement is in store. Pro Rodeo Hall of Fame Announcer, RandyCorley, will be joined by new co-announcer, James Horcasitas, to cover the eight performances.

Signature events like the annual rodeo dance will be held in downtown Prescott at the Depot Marketplace/BMO Harris Bank parking lot on the corner of Sheldon and Montezuma. The dance begins on Thursday, June 30, and runs through Saturday, July 2. Thursday night is family night so bring your entire family to kick up your heels. Tickets are $5 per person and can be purchased at the door.