YCSO starts fund for deputy killed in line of duty 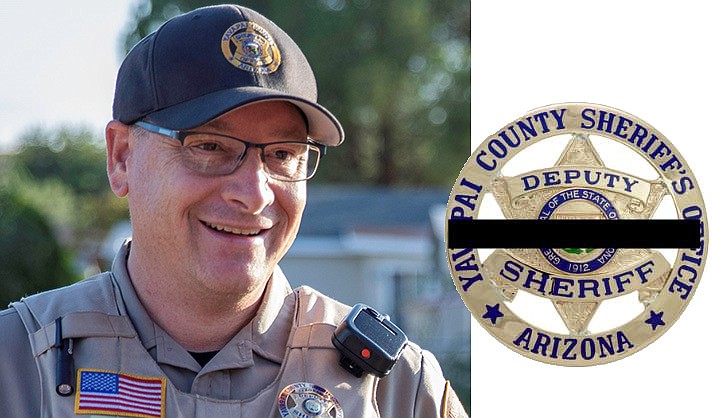 Sgt. Rick "RLo" Lopez was killed in the line of duty and leaves behind a wife And two children. (YCSO)

After the death of a Yavapai County Sheriff’s Office deputy Tuesday in Cordes Lakes, YCSO has started a fund to help the family.

Sgt. Richard Lopez, 51, was reportedly shot while carrying out the “routine business” of trying to apprehend a suspect in a case of possible theft, Sheriff David Rhodes said at a press conference.

“We don’t know what happened,” he said.

Dispatch received a call of an officer in distress, and YCSO and Arizona Department of Public Safety officers responded to the area of Stagecoach Trail and Red Rock Road. When they arrived, they found Lopez unresponsive. He was taken to a nearby fire station and flown to Honors Hospital, where he died from his injuries, according to the sheriff.

Rhodes said Lopez, a resident of Prescott Valley, leaves behind “a wife and two daughters, who are devastated.”

The suspect, Robert McDowell, 61, of Mayer, was taken into custody after barricading himself in his home, according to YCSO. He was booked on expected charges of first-degree murder.

To donate to the Lopez family, send checks, money orders or cashier’s checks to The Sheriff’s Office, attention Kelly Fraher, 255 E. Gurley St., Prescott AZ 86301. Cash may also be dropped off at that location in person. When writing out the check, write “Benevolence Fund: Richard Lopez” in the memo line.