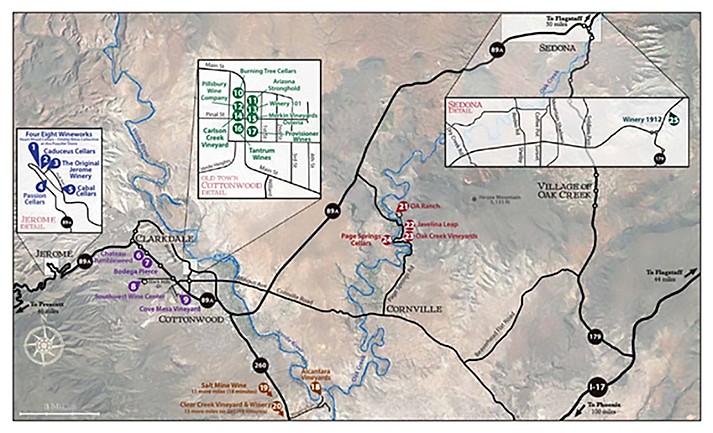 It is no secret that the Verde Valley is a popular tourist destination, whether it a be a trip to the beautiful red rock country of Sedona, a day spent exploring the old mining town of Jerome, or an afternoon outing browsing the shops and galleries of Cottonwood.

Perhaps less known, but quickly gaining notoriety, is the wine industry found in the area. In December of 2021, the Alcohol and Tobacco Tax and Trade Bureau (TTB) officially designated a 219-square mile area of the Verde Valley as an American Viticultural Area (AVA). TTB regulations describe an AVA as “a delimited grape-growing region having distinguishing features… and a name and a delineated boundary.” This designation gives the area recognition as an official grape growing region recognized by the federal government. It also helps both wine producers and consumers to connect certain characteristics of a wine to the area where it was produced.

The topography of the Verde Valley AVA is quite suitable for viticulture, or the cultivation and harvesting of grapes. While the perimeter is surrounded by mountains and foothills, the area within contains gentle slopes, which makes vineyard management less challenging. In addition, the vast difference between day and night desert temperatures (high temperatures during the day and low temperatures at night) prolongs the maturity process of the wine grapes, which results in more intricate wine flavors and allows for a longer growing season. The image below shows the geographic extent of the Verde Valley AVA.

The recent designation of the Verde Valley AVA is quite an accomplishment. There are only two other areas recognized as American Viticultural Area’s in Arizona, both of which are located towards the southern end of the state – Willcox and Sonoita. Obtaining this esteemed designation was not easy; it took more than four years. The Verde Valley Wine Consortium (VVWC) began petitioning for the Verde Valley to become an AVA in 2017, not seeing the fruits of its efforts until late last year. The VVWC’s vision is to “[assist] in creating, nurturing and advancing the Verde Valley as a significant and important wine region – locally, regionally, nationally and internationally – in every aspect of winemaking, wine culture, wine education and wine tourism.” The VVWC offers the opportunity to join their organization as a member and receive benefits while supporting their efforts.

The VVWC was formed with help from the Verde Valley Regional Economic Organization (VVREO). VVREO is a local non-profit organization whose mission is to “[provide] access to resources for regional business creation, attraction, retention, and expansion.”

I had the privilege of speaking with Paula Woolsey, the current vice president and educational chair of the VVWC, the vice president of the Verde Valley Wine Trail, and an adjunct professor at the Southwest Wine Center. Paula was one of the initial individuals to advocate for the creation of the VVWC and explained how it was formed. Tom Schumacher (who is now the president of the VVWC), Casey Rooney, and Tom Pitts were all on the board of directors of VVREO at the time of the VVWC’s creation and worked with Paula to come up with the idea and vision for the VVWC. The VVWC needed VVREO as an “incubator” organization since they were already an established non-profit organization.

VVREO harbored VVWC for almost two years while they worked on satisfying all of the legal requirements necessary in order to become an established separate entity.

The winemaking industry has a substantial impact on Arizona’s economy. According to a 2017 study conducted by the Alliance Bank Business Outreach Center at Northern Arizona University, an estimated total of $56,178,643 is contributed to the economy and 640 full-time jobs are created as a result of the Arizona wine tourism industry. In addition, about $3.6 million in state and local taxes are collected. Comparing these results to a similar study also done by NAU in 2011, total economic activity from tourism in the wine industry has increased by 49.3% over a period of 6 years. The 2017 NAU study is the most recent comprehensive review of the matter. However, with the ever-increasing popularity of the Verde Valley area, and Arizona as a tourist destination in general, it can be reasonably inferred that the positive economic impacts of the Arizona wine tourism industry are even greater today, and will continue to grow.

The Verde Valley is not only a top wine tourism destination in Arizona; it also produces some of the best vintners, or wine producers, in the state. The Southwest Wine Center (SWC) located at Yavapai College offers degrees in both viticulture and also enology, which is the study of wine and winemaking. The SWC describes themselves as “a premier wine industry and community resource, offering a comprehensive hands-on education from vineyard-to-bottle with programs in enology, viticulture and business/entrepreneurship through its estate vineyard, teaching winery, fully-operational tasting room, and region-wide wine industry research epicenter.” The wines produced by students at the SWC frequently win awards, such as the 2018 SWC Viogner claiming the top spot in the 2019 azcentral statewide Arizona Wine Competition. The SWC was established in 2009 and enrollment in its degree programs continues to grow. Many of the wineries within the Verde Valley are either run by or employ graduates of the SWC. Paula Woolsey was the first to teach at the SWC and is still a professor there 13 years later. She says there have now been 12 wineries that were started from graduates of the SWC.

The Verde Valley Wine Trail provides useful information for anyone wanting to experience what the wine industry in the area has to offer. The trail map boasts 25 wineries in the area and their website (VVWinetrail.com) contains additional information about wine tours and local attractions.

For more information visit vvreo.com or contact VVREO at administration@vvreo.com or 928-300-1640.