Met Live Opera ‘Turandot’ on screen in Sedona May 7 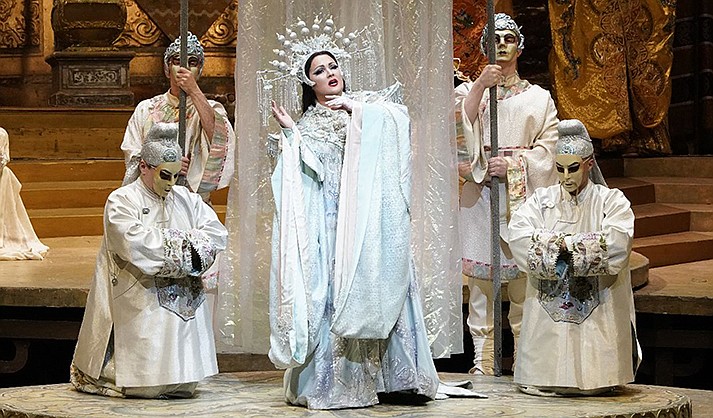 The Mary D. Fisher Theatre is honored to be the home for the Met Live Opera programs for the 2021-2022 season, presented by the Sedona International Film Festival. The season will continue with Giacomo Puccini’s “Turandot” on Saturday, May 7. There will be one show at 10 a.m. — a live simulcast as it is happening at the Met!

Plan to come early as Deborah Raymond will lead a pre-opera talk one hour before the production.

Legendary Peking. Any prince seeking to marry Princess Turandot must answer three riddles. If he fails, he will die. Among the crowd, Calàf discovers his long-lost father, Timur. As the latest failed suitor goes to his death, the crowd calls upon the princess to spare him, but Turandot orders the execution to proceed.

Ping, Pang, and Pong dream of their country homes, but the noise of the crowd gathering calls them back to reality. Turandot arrives for the riddle ceremony. After Calàf answers all three correctly, the princess begs her father not to give her to the stranger.

Ping, Pang, and Pong try to bribe Calàf to leave the city. Soldiers drag in Liù and Timur. Despite being tortured, Liù refuses to reveal the stranger’s identity. She snatches a dagger and kills herself.

The Met Live Opera’s “Turandot” will be shown at the Mary D. Fisher Theatre on Saturday, May 7 at 10 a.m. (live simulcast). The pre-opera talk will take place one hour before the show. Tickets are $25 general admission, $22 for Film Festival members, and $15 for students. Tickets are available in advance at the Sedona International Film Festival office or by calling 928-282-1177. Both the theatre and film festival office are located at 2030 W. Hwy. 89A, in West Sedona. For more information, visit: SedonaFilmFestival.org.