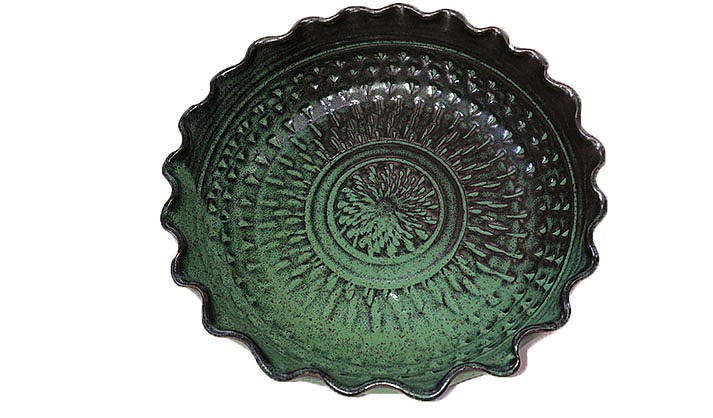 Ceramic artist Kenneth Barnes will be featured during the month of May at the Village Gallery of Local Artists.

Barnes’ pottery strikes a harmonious balance of function and form; a consequence of his innate artistic talent, coupled with decades spent patiently honing his craft. His work shows distinct personality and elegance with the handle of a tea pot or pitcher, or rope in a water jug. He captures the local flavor of the Sedona area with wild javelina marching across a baking dish, or the image of Bell Rock embellishing a mug.

His glazes range from commercially available base glazes to those produced from complex recipes which he developed and refined over time. Barnes uses high-fired stoneware clays and food safe glazes, making his pieces safe for food, dishwasher and microwave. 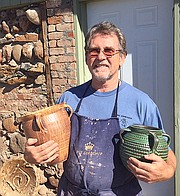 Kenneth Barnes with some of his pieces. (photo courtesy Ken Barnes)

Barnes has always been fascinated with the production of something functional and beautiful using a piece of raw clay and a few chemicals. His main interest lies in wheelwork, although he continues to explore all aspects of ceramics which maintains his keen enthusiasm for the art form.

Born in Yorkshire, England, Barnes’ first introduction to clay was in a local evening pottery class. Living in a small mining village, he was surprised to find quite a number of talented artists, who all used the local art classes as a form of artistic release and an excuse to congregate at the local pub after class.

Barnes says “Anyone who is an artist knows that you can feed off one another and generate camaraderie, which is priceless.”

After immigrating to Michigan in 1981, Barnes continued to study ceramics and foster his addiction to clay, which was a nice balance for his day job as an engineer. He explains “One can become completely absorbed in throwing a complex form on the wheel and forget the rigors of daily life.”

Barnes retired from engineering in 2017 which left him more time to focus on his artwork and travel the world with his wife Linda.

Barnes donates about 50 dog face mugs every year to a border collie rescue group that he and his wife were involved with in Michigan. He says they are “always looking for people to help with mug transportation to MI.”

Several years ago, Barnes became a working member of the Reitz Ranch Center for Ceramic Arts in Clarkdale, where he often glazes his pottery in a cone 10 gas kiln, and enjoys comradery with his fellow clay addicts. He also has a small studio in his home in Sedona which he built at the end of 2020, where he produces the majority of his pieces.

While building this studio Barnes says he “managed to screw up my shoulder in the process and had to have rotator cuff and bicep surgery which left me with a new beautiful studio that I couldn’t use for six months.”

However, he’s now back in business again, producing one of a kind pieces as well as a range of popular items such as his “Bell Rock Baconator,” mugs and various bowls.

The Village Gallery is located at 6512 State Route 179 in the Village of Oak Creek. Applications for new membership are available. For more information, stop by the gallery, call 928-284-1416, or visit the website at SedonaLocalArtists.com. 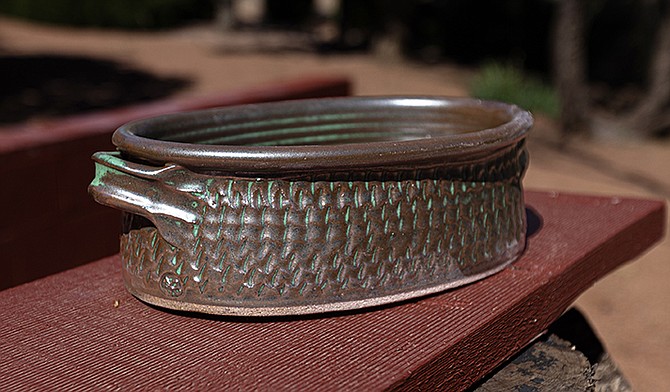