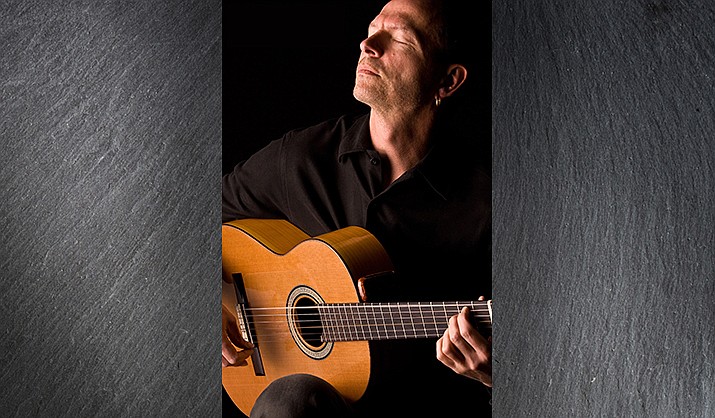 Internationally acclaimed guitarist Ottmar Liebert and his band Luna Negra will grace the Sound Bites Celebrity Showroom Stage Friday and Saturday, May 13-14, from 7 to 8:30 p.m. both nights.

Known for his unique style and interpretation of the art of Flamenco, Liebert founded the first incarnation of his band, Luna Negra, in 1989.

After the record made its way to radio stations, it began generating a buzz among programmers and received unprecedented response among listeners.

Higher Octave Music picked it up and released a fully remastered version, Nouveau Flamenco.  Recorded for less than $3,000 on an old analog machine in a shack beside a gravel pit, this CD became an international sensation, establishing Liebert’s unique border-style flamenco, and becoming the best-selling instrumental acoustic guitar album of all time.

Having recorded the album in Santa Fe, it was this openness to the local landscape that defined what was to become his musical style, a mix of Spanish, Mexican and World elements, strong melodies tinged with a shade of melancholy, balanced with upbeat rhythms.

“Santa Fe has great light, that special thing you get in the high desert,” he said. “Some days you can see for hundreds of miles, and you think you can reach into the sky or walk off a ridge and keep flying. That’s how I felt when I recorded Nouveau Flamenco.”

Make it a point not to miss this wonderful performer.

The Sound Bites Grill musical menu for the week also includes Patrick Ki and Robin Miller playing Wednesday, May 11, from 5 to 8 p.m.; Eric Miller and Adriel Zang playing Thursday, May 12, from 6 to 9 p.m.; and Dave Len Scott playing Sunday, May 15, from 11 a.m. to 2 p.m.

Sound Bites Grill is located at the Shops at Piñon Point adjacent to the Hyatt in Sedona. For more information please visit SoundBitesGrill.com or call 928-282-2714. Tickets can be purchased via Website.