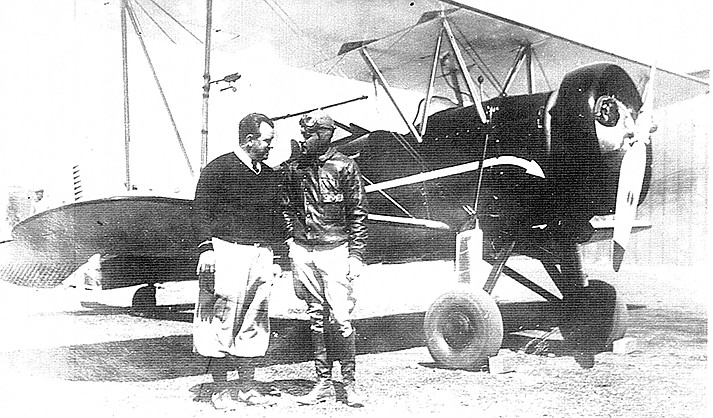 Clemenceau Airport where William A. Clark, III, and Harold John Lynch stood near the airplane they flew on May 15, 1932. (Courtesy of the Verde Historical Society.)

A tragic crash took the lives of William “Bill” Andrews Clark, III, and Harold John “Jack” Lynch, when a 2-place, open-cockpit airplane dove into the ground due to defective materials used in the bank-and-turn indicator instruments.

Plans were made for Clemenceau Field to become a national airport of call and the largest flying field in Arizona. “Trans-continental Air Transport, of which Charles Lindbergh is the head, Western Air Express, now [in 1929] operating an airline between Los Angeles and Kansas City, Copper State Airways, and other air passenger and service lines” will use Clemenceau Airport regularly. Copper State Airways plans to operate a school of aeronautics in addition to conducting a general commercial air business. “The field has a foundation of clay, surfaced with black slag” with white markings. “A number of hangars and other necessary buildings and accommodations will be constructed and equipped during the building program.” (Verde Copper News; Jerome; May 14, 1929.)

On May 15, 1932, the purpose of the flight was for Jack Lynch to instruct Bill Clark in the practice of “blind flying” or flying only by the use of the instruments on the panel. “The idea was to pretend Bill Clark was flying amid dense clouds and have his plane go into a tailspin and bring the plane out of the spin. In order to produce these conditions artificially a hood was stretched over the front cockpit where Clark was seated so he could not see out. Behind him in another cockpit was Jack Lynch, who had a duplicate set of controls” with no hood. Both fliers had their parachutes.

“At a height of 2,500 or 3,000 feet, Bill Clark, flying blind, went into a tailspin on purpose and after dropping about half that distance snapped the plane out of it. Golfers on the links [at Peck’s Lake] “witnessed the lesson. The plane then proceeded northeasterly and when about 2 miles or so from the links, Clark went into a second tailspin, but the plane never righted. Spectators who witnessed the fall notified the airport.” 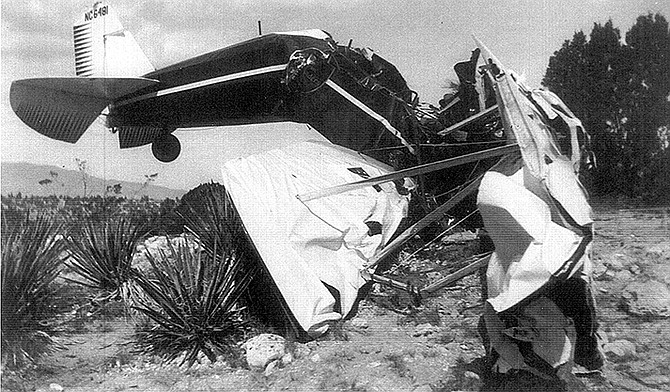 Airplane crash where William A. Clark, III, and Harold John Lynch were killed on a mesa east of the Verde River about 40 minutes after takeoff. (Courtesy of the Verde Historical Society.)

Marcus A. Rawlins, airport manager, said the airplane was in excellent mechanical condition when it took off from Clemenceau about 2 o’clock. Hoping “the fliers had bailed out and were safe, Marcus Rawlins and another man took off in a training airplane for the purpose of locating the fallen aircraft. Even from a height, Rawlins “discerned his flying friends had plunged into eternity.” They returned to the airport, gathered “some tools, and headed for the scene of the crash in an automobile, others following.”

After tramping “across some wild country for about a mile and a half from the nearest road” they reached the scene of the crash. The hood had been torn from Clark’s cockpit. There was no evidence that the fliers tried to leap for their lives before the airplane crashed on its nose with such force that the engine was driven under the front cockpit. Death had been instantaneous.

Harold John Lynch, 39, was one of the few pilots in the U.S. to hold a master pilot license, with between 4,000 and 5,000 hours of flying experience, in every type of airplane made. He “had given Col. Charles A. “Slim” Lindbergh his first lessons in flying.” They had barnstormed around the country. Jack Lynch joined Bill Clark in business several months ago and leaves Margaret (Strauss) and their children.

William Andrews Clark, III, 29, a descendant of the late Senator W.A. Clark, copper magnate of Montana and Jerome, held a private pilot license. He was a mining engineer and had operated the Cord and Auburn automobile agency at Phoenix before moving with his family to Clarkdale more than a year ago. He formed Verde Valley Air Lines, Inc., scheduled to begin regular flights in July. He leaves Thelma (Wyatt) Clark, their children, and his father, who was on a ship going to France and will “be transferred at sea to a returning steamer.”

The two-day Clemenceau Airport Dedication during March included an air circus with more than 20 airplanes with famous pilots from movies and races (Amelia Earhart) and attracted a crowd of 6,000 people. One pilot, E.E. Feuerhelm, a Standard Oil lubricating engineer from Phoenix, was killed when his airplane crashed into Mingus Mountain on April 15, 1932. Several other experienced pilots died in similar crashes before the defective parts were identified and replaced.

“Aviation in Yavapai County has been dealt a stunning blow by these fatal accidents. The airline company will be discontinued because Mr. Clark’s leadership will be missing.” In addition, the heirs of the Clark estates sold the United Verde Copper Company to Phelps Dodge Corporation in 1935.