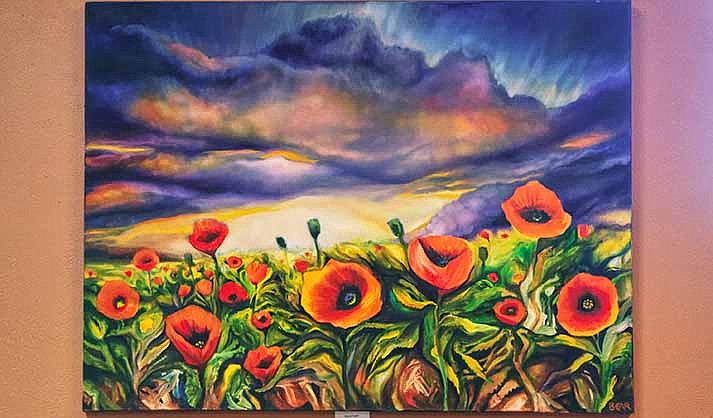 Art in the Clark is thrilled to present “Eartha - an Introspection” by Bear Schutz, on view now until the end of May at the Clark Memorial Library.

The exhibit features specially chosen works bridging 40-plus years of his career, not only traversing decades but also spanning a variety of media – including scratch board and ink work from the late 1970s, to Prismacolor pencils, jewelry, up-cycled musical instruments, clay, and two oil paintings finished just in time for this show.

Bear Schutz worked as an illustrator for Union College Publishing Department in the early ‘80s. By the end of the decade he had opened one of Lincoln, Nebraska’s largest alternative art galleries, Heyoka. He exhibited work in Kansas, Colorado, and New Mexico before arriving in Arizona.

Shortly after coming to the Verde Valley, Bear acquired a studio at the Jerome High School where his oil painting truly began to take form. In 2009 he opened the Earth Gallery in Old Town Cottonwood, hosting other artists and weekly music circles. Currently, he is producing some of his best work in Clarkdale and has a premium place to display and sell his work at Sedona Artist Market.

The true stars of “Eartha - an Introspection” are the large oil paintings, intoxicating dream-scapes full of color and enchanted artistry. 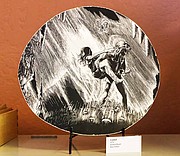 “My art celebrates and advocates for the beauty, significance, and our symbiotic connections to the natural environment… The art show Eartha is a memorial and celebration for all the lands, waters, flora, fauna and folks exploited, poisoned and killed by the greed of mining, corporations, and colonization,” Bear says.

Contemplate the spirituous work in “Eartha - an Introspection” by Bear Schutz at the Clark Memorial Library, located at 39 N. Ninth St. (behind the town center) during regular library hours Monday-Thursday 1-5:30pm and Friday 8 am to noon. Art in the Clark is a year round project promoting art and artists for the enjoyment of the library’s patrons and the community.