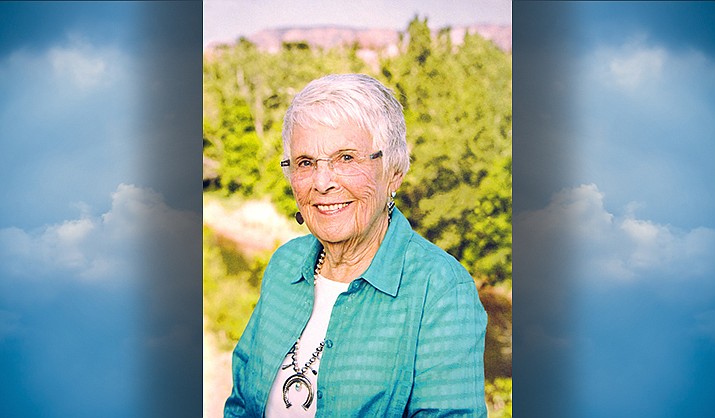 Mille was born May 5, 1928 in Hampden, Newfoundland, the second of the four children of Florence Victoria Roil and William Thomas Earle. The family moved to the provincial capital of St. John’s and later to Toronto after losing William to tuberculosis.


After graduating from Lawrence Park Collegiate Institute, Mille and family relocated to Tucson, Arizona, where she attended the University of Arizona and earned a B.S. in Microbiology in 1952. She continued her studies at the Huntington Memorial Hospital in Pasadena, California where she worked and earned a Certificate in Medical Technology.

While attending the University of Arizona, Mille met Thomas Leenhouts and they married on July 3, 1953.

The couple then lived in Ann Arbor, Michigan, San Francisco, California, and Minot, North Dakota, while Tom attended medical school and served two years in the Air Force. In 1963, Dr. and Mrs. Leenhouts settled in Flagstaff raising a family of four children and became actively involved in the arts and cultural affairs of the community. The family lived in Scottsdale, Arizona from 1974-76, but eventually settled in Sedona to be near Tom’s parents, Margaret and Willis Leenhouts, who owned and worked Cross Creek Ranch.

Mille was an eminent philanthropist in Sedona and Flagstaff serving on the boards of the Flagstaff Symphony Association, Young Audiences of Northern Arizona and Chamber Music Sedona as well as serving as a Muse for the Northern Arizona Museum.

She was an original member of the advisory board for the Arizona Community Foundation’s Sedona affiliate and was the trustee of the Thomas M. Leenhouts, M.D. Northern Arizona Endowment for the Arts, which has funded the Emerging Artist Series and the Kids Concert Club of the Verde Valley Sinfonietta as well as musical programs in Sedona’s elementary schools. A noted and convivial hostess, Mille ran many successful fundraisers for Northern Arizona’s artistic, educational, and political institutions entertaining luminaries as diverse as Arizona politician Bruce Babbitt and world-renowned cellist Janos Starker.

Despite her busy philanthropic schedule, Mille was a devoted mother with many hobbies and an active social life. She enthusiastically embraced leadership roles in the Cub Scouts and Northern Arizona 4-H in which her children were involved. All of her children received musical educations and were members in Northern Arizona Arts organizations such as the Flagstaff Symphony Youth Orchestra. The entire family enjoyed camping and hiking, which she continued well into her 90s as a volunteer at Red Rock State Park.

In Sedona, she was a member of the Sedona Arts Center, then known as the Art Barn, and participated in the Garden Club and Keep Sedona Beautiful.

Mille was extremely adept at household arts engaging in needlepoint, cross-stitching and quilt-making. Later in life she learned to work with glass to create tables and mirrors that adorn her home and those of her children.


Most of all, Millicent Leenhouts is remembered for her quick wit and warm heart. She was pre-deceased by her brother James Roil, but is survived by her four children William Thomas, David Earle, Margaret Anne, James Merrell, five grandchildren, her sister Doreen Northway, and her brother William Earle.

Please specify the donation is for the T.M. Leenhouts Arts Endowment.


Her family would like to thank the many warm and faithful friends who made Mille’s life so rewarding and productive. A memorial to celebrate her life will be held in mid-August specific date to be announced.