Living Legend: John Soderberg back in the studio after pushing through health crisis

The first time I met John Soderberg, he was dressed in a red Santa suit with a pillow stuffed in the belly and his natural white hair and beard framing his gentle eyes under the Santa hat. Every kid waiting in line to receive a gift from him and tell him their most heartfelt wishes believed beyond a doubt he was the real thing. And, in his life, he has proven them right, with or without the Santa suit.

Soderberg, 71, grew up in Afghanistan, India and Thailand because of his father’s job as a civil engineer. By the time he graduated high school, he had circled the world eight times and visited more than 70 countries. His path led him to the U.S. in 1968 to attend college but the culture shock was too much so he enlisted in the Marines in 1970. 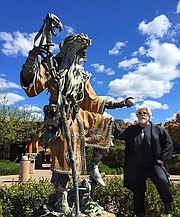 In an earlier photo, John Soderberg poses with his larger than life-size bronze Merlin in West Sedona. (John Soderberg/courtesy)

He was honorably discharged in 1973 at an Arizona base and stayed in the state. Having been nurtured in the art world by his parents throughout his life, John eventually moved to Flagstaff and learned the craft of bronze sculpting at a foundry there. Forty years later, his bronzes have been displayed in at least 10 countries and he continues to teach others his craft at his Sedona studio.

One of Soderberg’s current students is someone he considers to be promising as an artist.

“She’s one of my best protégés in all my years of sculpting and teaching,” Soderberg said.

Jill Trenholm started her tutelage under John about three years ago and she is currently working on a bust of Cernunnos, a Celtic deity.

“He’s the protector of the forest,” Trenholm said. “When I first came to John, I wanted to sculpt a dragon. But he encouraged me to start with a head. I didn’t think I could do it, but John is a great teacher.”

Locally, one of Soderberg’s most well-known sculptures is the larger-than-life ‘Merlin’ that sits in the cobblestone driveway of the Whole Foods plaza on State Route 89A in West Sedona. What many may not know is there is a water feature behind Merlin that includes another Soderberg pieces, ‘Merlin’s Chair,’ though the local kids who often take turns sitting in it refer to it lovingly as ‘The Mermaid Chair.’

At Jack Jameson Memorial Park, Soderberg’s ‘Invocation’ depicts a Teysha Indian in traditional regalia with extended arms receiving gifts of the earth, with grapes in one hand and a gourd vessel of wine in the other. His work ‘Anazasi’ depicting a soaring eagle is displayed at Sedona’s City Hall complex.

Recently, Soderberg has shared his health struggles on his Facebook page, including several surgeries over the past year and a half, but nothing has stopped him from continuing with his work.

Back in his studio, a little slimmer for wear, he has several works in progress. Two of the pieces he is currently working on include a larger-than-life bust of Zeus and a 9-foot Pegasus.

“The Zeus is a private commission piece,” Soderberg said. “The Pegasus is something I’ve always wanted to do so I just started working on it. But the first casting is already commissioned and will be going to Florida.”

In addition to his passion for his art, John also has a pressing desire to help make the world a better place. He became involved with Rancho Feliz shortly after its founding by brothers Gil and Troy Gillenwater of Scottsdale. Nearly 40 years ago, Soderberg travelled to the border town of Aqua Prieta, Mexico with a group of friends on motorcycles and raised over two hundred thousand dollars to assist the people in that community. He has continued to work with the organization which provides services to the poverty stricken residents of the area including housing, food security, education and scholarships. John personally sponsors a child and pays the costs of her education. 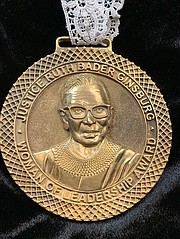 “About 10 years or so ago, a group of us went down in the middle of winter to provide food to people in the area,” John said. “We ended up feeding over 50,000 people in one day. It was cold, but people waiting in line for hours. Now we’ve built orphanages, school rooms, a commercial kitchen, dormitories and a literacy center there. We provide scholarships to the kids. We are helping to break the cycle of poverty.”

Just before her death, Supreme Court Justice Ruth Bader Ginsburg worked with the Dwight D. Opperman Foundation to create the Ruth Bader Ginsburg Woman of Leadership Award. She was aware that her time might be running short and she wanted to establish her legacy. In early 2020, the first RBG Award was given to Agnes Gund, renowned philanthropist and champion of justice reform. In 2021, the award was granted to Great Britain’s Queen Elizabeth II, and this year’s award went to Diane von Furstenberg, fashion designer, author and philanthropist.

Each recipient is awarded a bronze medallion with the likeness of the second woman to serve as a U.S. Supreme Court Justice. The medallion was designed by none other than Sedona’s very own John Soderberg – quite the legacy for John as well.

Cindy Cole is a freelancer for The Verde Independent. Reach her at cindycole@live.com.