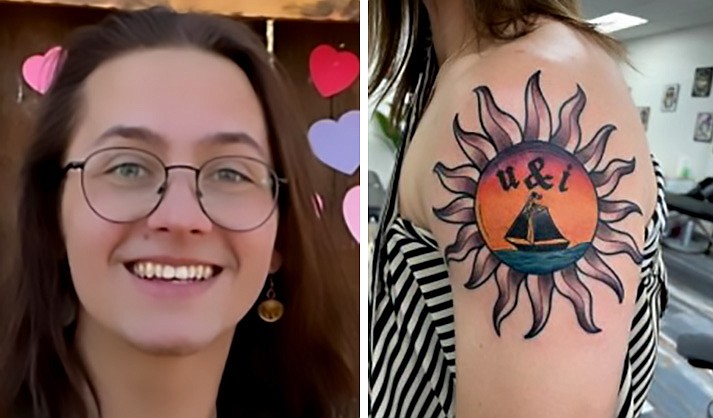 Axel Brugere has been missing since Friday. Coconino County Sheriff's Office released a photo of the man and an identifying tattoo.

Coconino County first responders continue to search for a hiker who went missing Friday, May 27, in Oak Creek Canyon after being separated from his hiking companion.

Axel Brugere, 20, of Flagstaff, was reportedly hiking the A.B. Young Trail near Bootlegger Day Use area around 11 a.m. Friday. Coconino County Sheriff’s Office described the Young Trail as a “short but steep hike from Oak Creek to the top of the plateau.”

His hiking friend, John, told investigators they reached the top around 1 p.m. While Axel stayed at the top, John decided to explore the area, which has access to the East Pocket Knob Lookout tower and Forest Service Road 231. When John returned around 30 minutes later, he said, Axel was gone.

John said he thought Axel went back down Young Trail to their vehicle, which was parked in the Bootlegger Day Use area.

“At this point, John became disoriented and was unable to locate the A.B. Young Trail back down to the vehicle,” the CCSO report states. “John located a drainage and started to head back down to Oak Creek. John was able to get down the drainage which ultimately took him to the area of Slide Rock State Park. John finally made it back to the Bootlegger Day Use area at approximately 11 p.m.”

Axel was not there. John did not have a phone or keys to the vehicle and spent the night in the restroom building. In the morning, he caught a ride back to his work in Flagstaff and called CCSO to report Axel missing.

According to CCSO, search-and-rescue teams arrived around 9 a.m. Saturday, May 28 to search for Axel Brugere.

“Search efforts have continued over the weekend with the assistance of an Arizona Department of Public Safety Helicopter on Saturday and Sunday,” CCSO reported. “Yavapai County Sheriff’s Office Search and rescue were requested for additional manpower. Currently there are approximately 25 people working the Search. Due to the extreme terrain and topography, CCSO Search and Rescue is utilizing Unmanned Aerial Vehicles (Drones) to search the area.”

Axel is described as white, 5-foot-9, around 140 pounds, with brown hair and green eyes. He was last seen wearing red shorts.