Employee injured in scuffle with suspect after robbery in Safeway 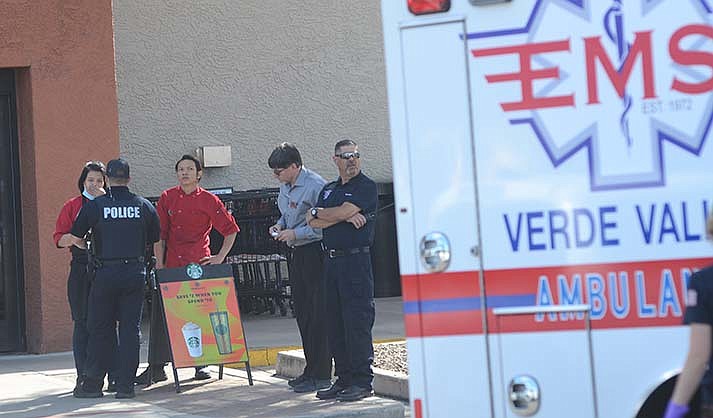 Cottonwood Police officers talk with staff after a reported theft and assault at Safeway Oct. 26. Two suspects have been identified but remain in California.

COTTONWOOD – Police are trying to get two suspects in a theft and assault in the Safeway shoppping plaza to return to Arizona to face charges.

Officers responded to the parking lot of the Safeway grocery store for a report of two women fighting. Prior to officers arriving the suspect had left the area in a vehicle, reportedly dragging the victim while doing so.

Officer’s contacted the victim, who told them that prior to the assault she witnessed an adult male and female shoplifting items from the store. She followed the suspects out of the store in an attempt to capture video and photos of them. She also told them she was calling the police.

The man apparently ran away across the parking lot but the woman continued to her vehicle.

As the female was entering the vehicle, the employee grabbed her arm, according to the report. The suspect allegedly struck the employee several times until a bystander intervened.

The suspect also took the victim’s phone and began to speed away. The victim was hanging onto the suspect, attempting to get her phone back, which resulted in her being dragged a short distance and thrown from the vehicle, according to the report.

The victim was identified as an employee for a separate business located within the Safeway store. The victim was unable to recover her cell phone from the suspects, and the suspects left the area prior to law enforcement arriving.

Cottonwood Police reported the employee had minor injuries to her face but refused medical treatment on the scene.

CPD is crediting the “follow-up and determination” of Officer Zack Smith with finding two suspects in the case this week.

They were identified as Jessica Garcia, 31, and Ricardo Garcia, 35, of Los Banos, California.

Police interviewed Jessica over the phone. She allegedly confessed to her involvement, saying she threw the phone in an attempt to destroy evidence. Jessica identified Ricardo Garcia as her husband.

“Based on Jessica and Ricardo residing out of state, efforts will be made to get them to return to face charges,” CPD spokesperson Sgt. Chad Sinn reported Tuesday..