Origins of Veterans Day – ‘To Honor Veterans of All Wars’ 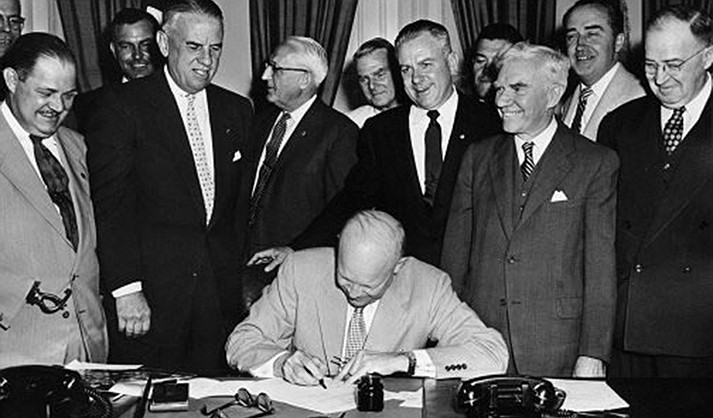 Raymond Weeks of Birmingham, Alabama, organized a Veterans Day parade for that city on Nov. 11, 1947, to honor all of America’s veterans for their loyal service. Later, U.S. Representative Edward H. Rees of Kansas proposed legislation changing the name of Armistice Day to Veterans Day to honor all who have served in America’s Armed Forces.

In 1954, President Dwight D. Eisenhower signed a bill proclaiming Nov. 11 as Veterans Day and called upon Americans everywhere to rededicate themselves to the cause of peace. He issued a Presidential Order directing the head of the Veterans Administration, now the Department of Veterans Affairs, to formal Veterans Day National Committee to organize and oversee the national observance of Veterans Day.

In addition to fulfilling that mission, the committee oversees the annual production and distribution of the annual Veterans Day poster and Teachers Resource Guide.

In 1968, Congress moved Veterans Day to the fourth Monday in October. However, it became apparent that the Nov. 11 date was historically significant to a great many Americans. As a result, Congress formally returned the observance of Veterans Day to its traditional date in 1978.

The Veterans Day National Ceremony is held each year on Nov. 11 at Arlington National Cemetery.

At 11 a.m., a color guard, made up of members from each of the military services, renders honors to America’s war dead during a tradition-rich ceremony at the Tomb of the Unknowns.

The President or his representative places a wreath at the Tomb and a bugler sounds “Taps.” The balance of the ceremony, including a “Parade of Flags” by numerous Veterans Service Organizations, takes place inside the Memorial Amphitheater, adjacent to the Tomb.

Veterans Day is intended to thank and honor all those who served honorably in the military – living and dead – whether in wartime or peace. In fact, Veterans Day is largely intended to thank living Veterans for their service, to acknowledge that their contributions to our national security are appreciated, and to underscore the fact that all those who served - not only those who died - have sacrificed and done their duty.