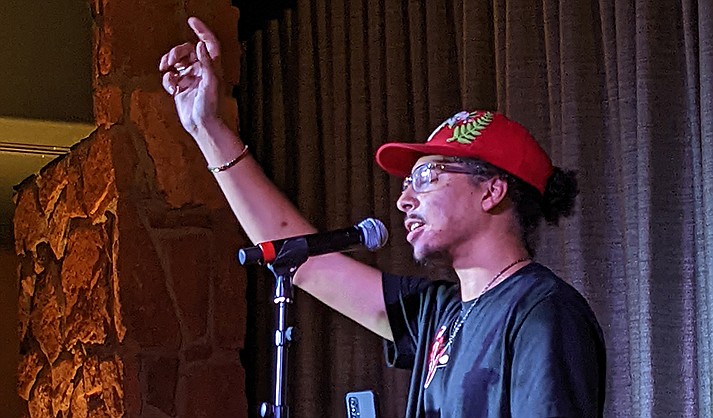 After two slams this year, the Sedona Poetry Slam returns to the stage on Saturday, Nov. 12, starting at 7:30 p.m.

A poetry slam is like a series of high-energy, three-minute one-person plays, judged by the audience. Anyone can sign up to compete in the slam for the $75 grand prize and $25 second-place prize. British-born Village of Oak Creek poet Roger Blakiston, a first-time slammer, out-scored some of the best slam poets in the state to win the top prize in September.

To compete in the slam, poets will need three original poems, each lasting no longer than three minutes. No props, costumes nor musical accompaniment are permitted. The poets are judged Olympics-style by five members of the audience selected at random at the beginning of the slam.

Slam poetry is an art form that allows written page poets to share their work alongside theatrical performers, hip-hop artists and lyricists. Poets come from as far away as Phoenix, Tucson and Flagstaff, competing against adult poets from Sedona and Cottonwood, college poets from Northern Arizona University and youth poets from Sedona Red Rock High School.

All types of poetry are welcome on the stage, from street-wise hip-hop and narrative performance poems, to political rants and introspective confessionals. Any poem is a “slam” poem if performed in a competition. All poets get three minutes per round to entertain and inspire the audience with their creativity.