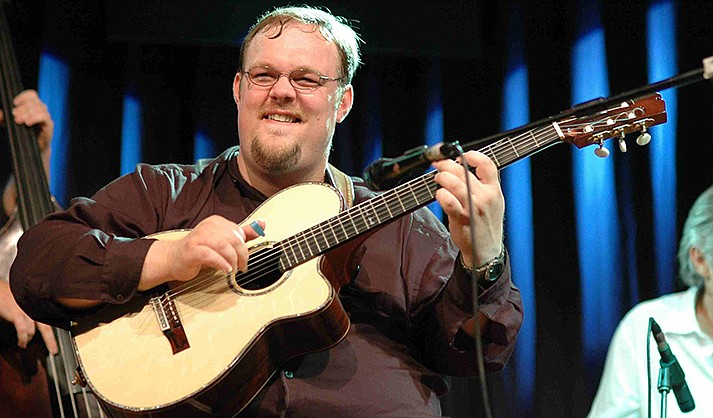 From Bach to the Beatles and barn-burners to ballads, audiences delight when world-renowned fingerstyle guitarist Richard Smith returns with his solo concert to Sedona by popular demand.

There will be one show on Tuesday, Nov. 15 at 7 p.m. at the Mary D. Fisher Theatre, presented by the Sedona International Film Festival.

Having witnessed one of his live performances, fellow musicians and music lovers alike sing hymns of praise about Richard Smith. With fretboard fireworks and lyrical endeavors, he will melt your heartstrings, make your toes tap and your jaws hang open. Richard’s ever-growing repertoire comprises a wide variety of music from classical Bach to Beatles pop. It includes Scott Joplin Rags just like Sousa marches, Chopin, Mozart and fiddle tunes. It ranges from jazz standards to Chet Atkins and Jerry Reed and to Django Reinhardt gypsy swing, not to mention his intriguing originals.

His incredible stylistic wealth is founded in a lifelong love for music. Born in Beckenham, Kent, England in 1971, Richard started playing guitar at age 5 under the instruction of his father.

It’s no surprise that the hymns of praise subsequently never faded. Now residing in Nashville, Richard has toured the world as a solo artist, teaming up with his wife Julie Adams for a unique guitar and cello duo, performing with his brothers Rob and Sam as the Richard Smith Guitar Trio and with his swing band, The Hot Club of Nashville, featuring Stuart Duncan on fiddle, Pat Bergeson on guitar and Charlie Chadwick on bass. Fellow guitar wizard Tommy Emmanuel prefers Richard Smith as one of his favorite duet partners. In 2001, Richard became the National Fingerstyle Guitar Champion in Winfield, Kansas. He was elected Thumbpicker of the Year in 2008 and inducted into the National Thumbpickers Hall of Fame in Kentucky in 2009. He is also a recipient of the Golden Thumbpick Award by the Association of Fingerstyle Guitarists in California.

For more information about Richard Smith, visit the artist’s website: richardsmithmusic.com. Viewing the video on his website will give one a very vivid picture of Richard’s playing style and incredible talent.

Richard Smith performs live in concert on Tuesday, Nov. 15 at 7 p.m. Tickets are $20 in advance or $25 at the door. All tickets include a meet-and-greet with Richard in the lobby after the show.