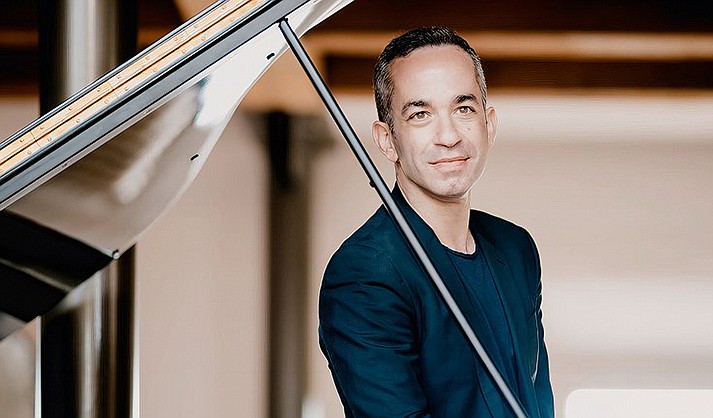 Chamber Music Sedona is excited to celebrate its 40th Anniversary Season, which will begin on Sunday, Dec. 4, with a solo recital by pianist Inon Barnatan.

Hailed by the New York Times as “one of the most admired pianists of his generation,” Barnatan is equally celebrated as a soloist, curator and collaborator. He will perform a thrilling program of Brahms, Handel, and his own virtuosic arrangement of Rachmaninoff’s beloved Symphonic Dances. Tickets are now available for “Past Inspirations,” which will be held at 3 p.m. at the Sedona Performing Arts Center, 995 Upper Red Rock Loop Road.

Since making his orchestral debut at age 11, Barnatan has built a unique and varied career. Celebrated for his poetic sensibility, musical intelligence and consummate artistry, he regularly appears as a soloist with many of the world’s foremost orchestras and conductors, and has served as the inaugural Artist-in-Association of the New York Philharmonic for three seasons. This past winter saw Barnatan’s return to the Chicago Symphony and London Philharmonic, his debuts with the Liverpool Philharmonic and Montreal Symphony orchestras, and recitals based on his lauded recent album release, Time-Traveler Suite.

Barnatan is the recipient of several prestigious awards, including a 2009 Avery Fisher Career Grant and Lincoln Center’s 2015 Martin E. Segal Award, which recognizes “young artists of exceptional accomplishment.” He was a member of the Chamber Music Society of Lincoln Center’s CMS Two program from 2006 to 2009, and continues to make regular CMS appearances in New York and on tour. With a passion for contemporary music, Barnatan often commissions and performs works by living composers. One of his most recent album releases is a live recording of Messiaen’s 90-minute masterpiece, Des canyons aux étoiles (“From the Canyons to the Stars”), in which he played the exceptionally challenging solo piano part at the Santa Fe Chamber Music Festival.

General admission tickets for “Past Inspirations” are $40 for adults and $15 for students aged 13-21 with ID; children 12 and under may be admitted at no cost. Reserved seating is available for up to $60 per ticket. To learn more about Inon Barnatan and to purchase concert tickets, visit ChamberMusicSedona.org/2022-inon-barnatan-time-traveler.