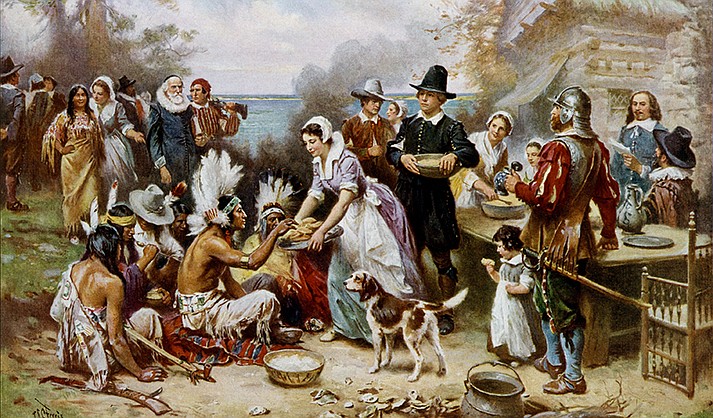 “Our harvest being gotten in, our governor sent four men on fowling, that so we might after a special manner rejoice together after we had gathered the fruit of our labors. They four in one day killed as much fowl as, with a little help beside, served the company almost a week. At which time, among other recreations, we exercised our arms, many of the Indians coming amongst us, and among the rest their greatest king Massasoit, with some ninety men, whom for three days we entertained and feasted, and they went out and killed five deer, which they brought to the plantation and bestowed upon our governor, and upon the captain, and others. And although it be not always so plentiful as it was at this time with us, yet by the goodness of God, we are so far from want that we often wish you partakers of our plenty.”--  “A Journal of the Pilgrims at Plymouth,” by Edward Winslow, 1621

Our language has changed drastically, our community spirit has changed and our general purpose for the holiday has changed (family fights and football, anyone?), but Thanksgiving remains a true treasure of the American society.

It is also possibly our nation’s oldest rite of remembrance. It was marked, unofficially, long before the Revolution. It is not divided by the varying beliefs of religious groups or the political climate. Europeans and Native Americans found this in common, a celebration of the finish of the harvest and the good grace of God in the bounty.

A push for an official national holiday started when George Washington called for a general Thanksgiving in December 1777. New Hampshire started a proclamation in the Continental Congress for a general Thanksgiving in late November 1782. As president in 1789, Washington actually had the power to declare the holiday, but it remained an on-and-off affair as Americans still wanted to celebrate the harvest any old time they wanted. You know us.

In a deft move in the middle of war, Abraham Lincoln locked down the last Thursday in November as the national holiday of Thanksgiving.

He added for all God-fearing people: “And I recommend to them that while offering up the ascriptions justly due to Him for such singular deliverances and blessings they do also, with humble penitence for our national perverseness and disobedience, … fervently implore the imposition of the Almighty hand to heal the wounds of the nation and to restore it, as soon as may be consistent with the divine purpose, to the full enjoyment of peace, harmony, tranquility, and union.”

It is clear our language was continuing to evolve, but we can all still identify with “national perverseness and disobedience.” Naturally, a bit of political perverseness during Franklin D. Roosevelt’s administration resulted in the holiday moving to the fourth Thursday, period.

As with the first Thanksgiving ever recorded, we still carry the often elusive hope of “perfect union and good understanding.” In a way, we envy that more innocent time before the empty page of the American chronicles began to fill with great inconsistencies - nobility and perversity.

It’s been more than 400 years, and Thanksgiving still has its pull on us. We are offered a day of self-evaluation and recognition of what really is good in our lives.

What are you thankful for?