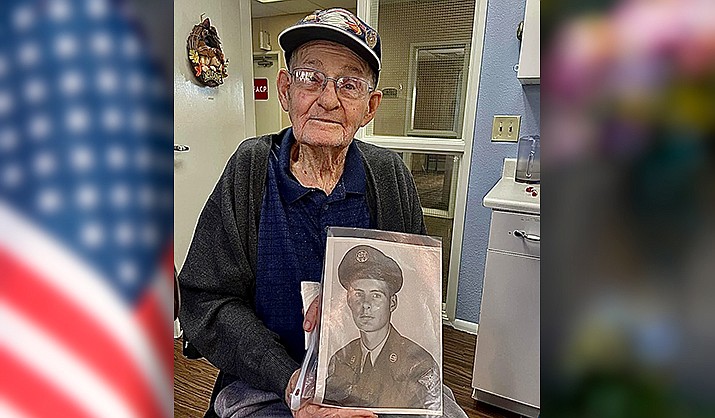 John Allen Mikesell, age 92, passed away peacefully on September 30, 2022 at Verde Valley Medical Center in Cottonwood, Arizona. Mr. Mikesell was born August 23, 1930 in Dayton, Ohio and spent most of his lifetime living in California, Arizona, and Colorado.


With permission from his parents John enlisted in the United States Air Force in 1947 at age 17 and was a proud post-World War II veteran as well as a lifetime member of the Veterans of Foreign Wars (VFW).


Just like his wife of 52 years, Jane Mikesell, whose passing in September 2019 preceded him, he was a devoted animal lover and contributed regularly to the American Society for Prevention of Cruelty to Animals (ASPCA) and other animal protection charities.

He was a gifted poet and in 1997 had his book of poems titled “Golden Poetry” published with 50% of the sales profits donated to mission work to help those in need.

The opening poem in his Golden Poetry book, “Alpha and Omega,” is a poem he was especially proud of.

For many years it was a tradition for him to write a Christmas poem for each of his sons of which they are extremely grateful. He prided himself as an excellent carpenter and woodworker and in his later years kept himself busy as a skilled handyman.

Wherever he lived he was active in the community and belonged to numerous organizations such as American Legion, Elks Club, and Fraternal Order of Eagles to name a few. He and his wife Jane were devout Christians and while living in Casa Grande, Arizona they were members of Trinity Southern Baptist Church.

He loved fishing whenever he had the opportunity and he and Jane would rarely miss an episode of the “Wheels of Fortune” evening television show.

His hobbies were coin collecting, writing poems, playing pool, and playing cards and other games with family and friends.


He is survived by his daughter, Cindy Schueman; sons, Mike and Mitch Gordon; four grandchildren and 14 great-grandchildren.