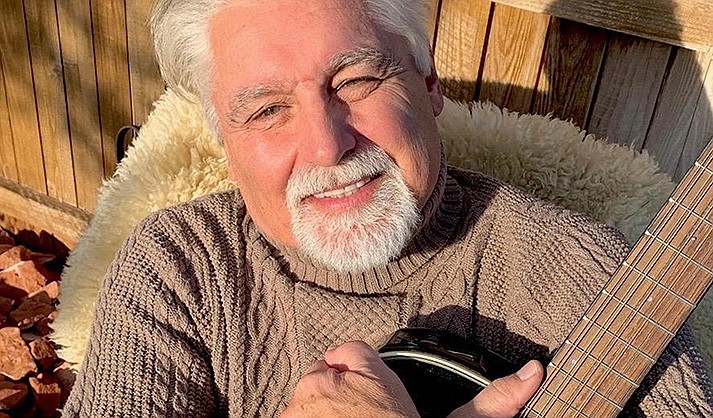 Local performer Jerry McFarland takes Bella Vita Ristorante by storm this weekend, performing Friday and Saturday, Oct. 14 and 15, from 6:30 to 9:30 p.m. both nights.

McFarland has been performing music since he was a boy, inspired by his father.

In 1962 his father, a country singer, was doing a record with Glen Campbell in Los Angeles. Soon thereafter, Jerry saw The Beatles on Ed Sullivan Show.

“Dad gave me his Fender Jazzmaster, and that started it,” McFarland revealed.

After a long and successful career as one of Southern California’s most popular musical performers, McFarland is proud to call Sedona his home.

Performing as a vocalist and accompanying himself on guitar or piano, he covers a wide array of styles from soft Latin inspired Jazzy Bossa Nova to soulful Rhythm & Blues Classics.

His deep catalog spans decades, often resulting in an impromptu musical journey, as Jerry asks the audience to call out favored songs or artists.

Career highlights include sharing the stage with great artists such as Bill Medley of the famed Righteous Brothers, The Drifters and many other recognized performers.

He has performed in such venues as the Hollywood Bowl, The Troubadour and Anaheim Stadium, working with great touring musicians such as Frank Cotinola (Cher, Jose Feliciano), Greg Leisz (Jackson Browne, Shawn Colvin) and Steve Wood (Kenny Loggins).

Jerry Wayne McFarland has had his original work recorded and published through Warner Brothers/Tamerlane Publishing and Screen Gems Music. His last CD, VOICES FROM the ATTIC released by Randolf Media Corp and can be found on iTunes, Amazon and other popular music sites.

Make it a point to see this consummate performer live this weekend at Bella Vita Ristorante.

The restaurant is located at 6701 West State Route 89A. For reservations and specific directions to the restaurant visit bellavitasedona.com or call 928-282-4540.