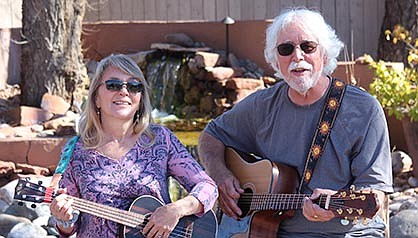 Enjoy the cool autumn evening on the patio at Vino di Sedona for an evening of music, wine, food, and fun with JBTwo 7-10 p.m., Friday, Oct. 14.

JBTwo is Jill Beitman (vocals, ukulele and lead kazoo) and Pat Tucci (vocals and guitars). They play an eclectic mix of classic rock and blues with a couple other genres thrown in to keep it interesting. They have played several shows at Vino di Sedona over the past year or so, and they can be found, both together and individually, at some of the open mic nights and jam sessions in the Verde Valley.

Jill has spent most of her musical life as a vocalist. She was a music major in college and picked up a little bit of required piano and guitar. Jill has been in groups covering many different genres, including jazz, country, blues, rock, and even a cappella. She spent the previous 10 years performing in the Scottsdale area with the Jill Beitman Trio, frequenting the Herb Box and even played at the Musical Instrument Museum. After moving to Sedona, ukulele seemed to be a novelty in the area. According to Jill, “It was a perfect fit, being that I’m under five foot tall. Who knew that it works with blues and even Irish jigs?” After meeting at the local open mics, Jill and Pat have found their niche in the music scene.

Pat handles all of the guitar playing for JBTwo and plays both 6- and 12-string acoustic guitar in the band. He’s a featured vocalist on several songs, and adds his harmonies to Jill’s vocals on many songs. Pat’s been playing guitar since his teen years in upstate New York, and was influenced by various blues musicians early on. Although blues is his favorite music, he’s also a big fan of the Beatles, Dan Fogelberg, Chuck Berry, Yes, and many others. Pat is a member of the Northern Arizona Blues Alliance, and opened their Blues Festival in Sedona last September. Pat and his wife moved to Sedona about 5 years ago and were immediately impressed with the great music scene and the quality of the musicians in the area.

JBTwo has a set list that has something for almost everyone, including songs by the Beatles, Fleetwood Mac, Bob Dylan, Bonnie Raitt, B.B.King, The Everly Brothers, Chris Stapleton, and more. Feel free to dance and sing along! Samples of a few of JBTwo’s songs can be heard at .reverbnation.com/jbtwo.