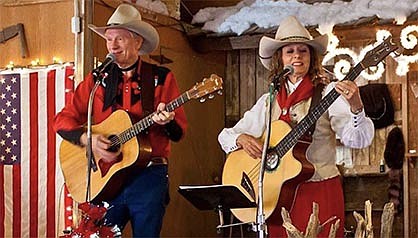 You like cowboy music? You like yodeling? You like good, old-fashioned foot stomping cowboy tunes sung in perfect harmony? Then make it a point to come to Sound Bites Grill this weekend to catch husband & wife cowboy-music duo Jim & Jeanne Martin in concert on the Sound Bites Grill Celebrity Showroom Stage, Sunday, Oct. 16, from 5 to 8 p.m.

The Martins have played together for audiences throughout the United States for over 20 years sharing their love of the history and music of the American West.

They are colorful, always dressed in cowboy/cowgirl theme for their performances. They sing like they have been singing together for most of their lives, which is literally true.

Jeanne is a master at yodeling and a solid bass guitarist, having won national awards for her yodeling, including being named a National Women’s Yodeler.

She and her husband fit perfectly together in bringing to life the great songs of the American west.

Jim Martin, famous for his Chuck wagon music, plays guitar and together with Jeanne they keep their audiences thrilled and enthralled with their historical shows featuring the best of the cowboy tunes people cherish and remember.

The duo is featured regularly at the Blazin’ M Ranch in Cottonwood, represented as two of the best cowboy music performers in the Greater Sedona area.

The Martins have been honored to work with several well-known Western stars such as Michael Martin Murphey, Riders in the Sky, Rex Allen Jr., Johnny Western, and Patsy Montana.

They have been featured performers at the National Festival of the West in Scottsdale for the past 20 years and will be performing there again in March of this year as well.

Throughout the years Jim and Jeanne have been recognized for their range of musical talents with a variety of awards. In addition, the Martins have been honored six times as the Western Music Association Harmony Yodeling Champions.

So, all you cowboys and cowgirls out there listen up! Get your boots and spurs on and come on down to Sound Bites Grill this Sunday and enjoy the sounds of Jim & Jeanne Martin while enjoying dinner from 5 to 8 p.m.

Sound Bites Grill is located at the Shops at Piñon Point adjacent to the Hyatt in Sedona. For more information please visit SoundBitesGrill.com or call 928 282 2714. Tickets can be purchased via website.