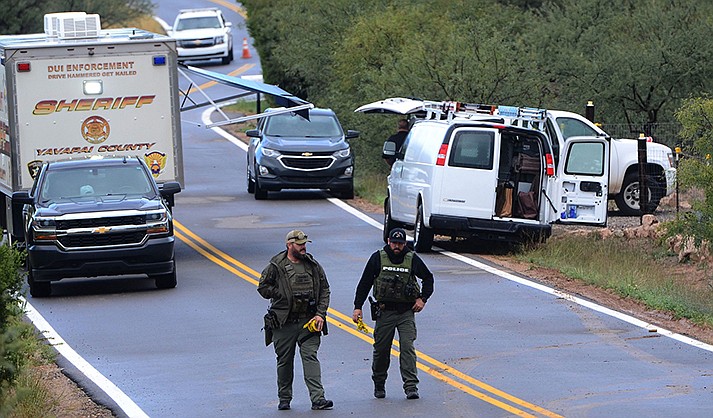 RIMROCK - One man is in custody, and law enforcement officers have identified the two men killed at a party in Rimrock Saturday night, Oct. 15.

Edgar Ruiz Arreola, 26, of Rimrock, was arrested without incident Sunday morning and booked into the Camp Verde Adult Detention Center on a charge of first-degree murder.

"At this point in the investigation, after interviewing witnesses at the scene and gathering evidence, there was probable cause to charge Edgar with first-degree murder," Yavapai County Sheriff's Office spokesperson Laura Bauer stated Monday.

YCSO announced the deceased as Rafael Zapata, 27, of Camp Verde, and Efrain Arreola, 27, of Rimrock. Edgar Arreola is accused of murdering Zapata.

The incident occurred during a "large party" at a residence in the 4000 block of Top O' the Morning Drive, which runs south of East Beaver Creek Road in the unincorporated community.

According to YCSO, Edgar Arreola told investigators Zapata pulled a gun and started fighting with other partygoers and was told to leave.

"Edgar stated Rafael began shooting at people, resulting in the shooting death of Efrain Arreola, at which point Edgar shot and killed Rafael with his Glock 9mm pistol," Bauer stated. "Edgar sustained a gunshot wound to the arm during the shootout."

There are several residences in the area of the incident. Neighbors reported hearing what sounded like fireworks while others quickly identified the noise as gunshots.