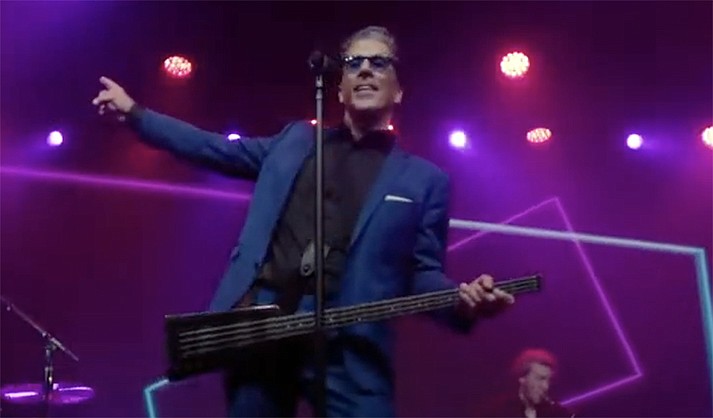 Sound Bites Grill often features legendary performing artists and on Friday, Oct. 22, from 7 to 9 p.m., Slim Man and his band take the Celebrity Showroom stage for a performance few will forget.

A respected songwriter for Motown Records and an electrifying performer, Slim Man has had songs recorded by the Temptations, Angela Bofill, Carl Anderson and others.

He also recorded a CD for Motown, which gave birth to his signature style – a unique blend of jazz, soul, and pop.

He was inspired to become a musician when his father took him to see a movie “The Five Pennies,” starring Danny Kaye and Louis Armstrong.

When he saw Armstrong sing and play, “Slim Boy” decided, at the tender age of 5, that that was his life’s calling and studied trumpet for ten years, teaching himself how to play piano and guitar as well.

He was in fifth grade when he played guitar, singing a few Beatles songs for the sixth-grade graduation. Since that time, he worked himself up from nothing, out of extreme poverty, to become the star that he is today.

While in his teens he studied music, at Peabody, a school for mostly classical music, where he theory, and harmony, and privately studied singing, and jazz piano.

His first big break came when he went on a trip to New York City to meet a publisher who had expressed some interest in his songs, where he met Roxanne Gordy, Motown publishing executive.

Motown eventually signed him as a songwriter, and one of the first tunes he wrote made it onto Angela Bofill’s first CD, “Angie.”

He spent the next year writing, arranging and producing a CD recorded with legendary music producer Carl Griffin, who discovered artists ranging from Evelyn “Champagne” King to Diana Krall.

Later, he formed a band called BootCamp which was one was one of the first bands to be videoed on MTV.

Those videos catapulted BootCamp into a successful concert career, performing with The B-52s, Squeeze, Split Enz, Johnny Winter, and others. In the late 1990s, he started Bona Fide, an instrumental group whose combination of funk and jazz brought forth the Number One single “X Ray Hip.”

Later, his CD End of the Rainbow was born. He worked hard and long on the CD and the subsequent follow-up. He found a manufacturer to press the CD and a radio promoter, who took the first single from that CD Faith in Us to the Top Ten.

Slim Man found a nationwide distributor for the CD, started touring, recording, and producing and he hasn’t stopped yet.

He even sang for Pope John Paul II at the Vatican on Christmas Day 1999, one of his many accomplishments during his illustrious career.

Slim man is ready to rock Sound Bites Grill and put on a show people will talk about for a long time. He will be performing with a four piece band including saxophonist Will Donato!

Be sure to make it a point to catch this multi-talented musician and songwriter this weekend. Doors open at 5:30 and the show is 7 to 9 p.m.

Sound Bites Grill is located at the Shops at Pinon Point adjacent to the Hyatt in Sedona. For more information please visit SoundBitesGrill.com or call 928-282-2714. Tickets can be purchased via Website.